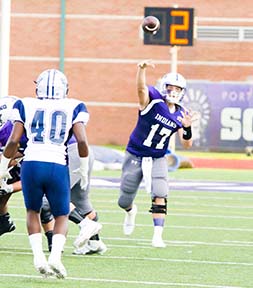 PORT NECHES — Brandon Faircloth admitted to something it is hard to imagine he has told many sports reporters in the past.

His Indians defeated Baytown Lee 45-10 the night before, so Faircloth was out scouting and soaking in the sights and sounds of Southeast Texas high school football.

“Defense went to Nederland versus Vidor and offense went to Goose Creek and Central,” Faircloth said. “I love watching other teams. It is stress-free. I love football. I am a football fan.

“It is a great feeling to know a decision I am going to make is not going to impact this game. I am relaxed. I really enjoy the game. Goose Creek and Central had a great game. We had already won, so it was a nice night to go watch football and have an extra day of rest.”

Starting the District 22-5A schedule 1-0 was certainly a lot better than the alternative for Faircloth and the Port Neches-Groves Indians.

Now, it is a new week and a new challenge. The Indians entertain the Goose Creek Memorial Patriots at 7 p.m. at The Reservation.

Goose Creek brings in 22-5A’s lowest ranked offense that averages 293.5 yards per game, and the Patriots will face the district’s No. 1 ranked defense in PN-G. The Indians give up an average of 201 yards a game.

“They are talented on both offense and defense,” Faircloth said. “They have two quarterbacks who are both really good. They both bring something different to the table.”

Deandre Herman is the running quarterback. He has 168 yards rushing on 15 carries with three touchdowns. Herman has thrown for 120 yards and two scores and one interception.

Hunter Hamm is the pocket passer with 429 yards on 37-of-65 passing with four interceptions and one touchdown.

“They do have a great rushing attack,” Faircloth said of the Patriots. “Just like everyone else in our district, they have really good players and coaches. They are a solid team in our district.”

Running back Stephen Adams leads Goose Creek with 299 yards on the ground on 60 totes with three touchdowns.

One thing Faircloth has told his players this week is to forget what happened with his team and the Patriots in previous games.

“You can’t look at last week in our district,” Faircloth added. “Every week is a new week. I don’t put any stock in the week before. You never get the same team. Everyone seems to play better the following week. They will have a game plan when they come into The Reservation.”

Last week the Indians were a perfect example of taking what the defense gave them against Baytown Lee.

PN-G is known best for its talented passing attack under the careful watch of quarterback Adam Morse and pass catchers Jack Giblin and Caisen Sullivan.

So when the Ganders dropped three safeties back in coverage, the Indians decided to run the football.

PN-G rushed for 259 yards on 39 carries against Baytown Lee.

“Lee was giving us the run,” Faircloth said. “We try to be flexible enough to change. Kody (Cropper), Jace (Runnels) and our offensive line did a really good job and I am proud of them for making the adjustment on the fly.

“Our line, like almost every school’s line, is a work in progress. As you play the season, the line gets better. It was a good week for them after having a good week against Tyler Chapel Hill.”

There was only one, just one, problem Faircloth admitted he still held onto after the game against the Ganders.

“We still had a turnover,” Faircloth said. “It was only one but that is one more than I want to see.”