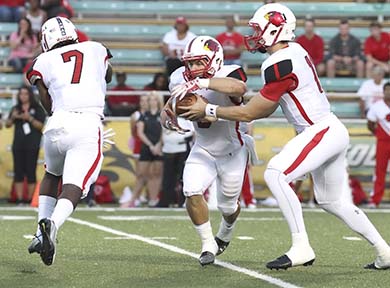 Kade Harrington of Lamar takes a handoff from Carson Earp in Thursday’s game at Southeastern Louisiana. Earp left the game in the second half. (Lamar sports information)

HAMMOND, La. — A touchdown with less than 2 minutes remaining put an end to the Lamar Cardinals’ third consecutive upset of a ranked Southland Conference team as the No. 22 Southeastern Louisiana Lions survived a scare, 30-27,Thursday night at Strawberry Stadium.

The Cardinals fall to 2-2 on the season and 1-1 in conference play, while the Lions improve to 3-1 overall and 2-0 in league play.

“This is a tough loss to take,” said head coach Ray Woodard. “We had to overcome a lot of things tonight. I’m proud of how we continued to fight, but obviously I’m disappointed. We didn’t execute as well as we have in the past. We left some opportunities on the field. You have to give Southeastern a lot of credit. They fought hard and made the plays when they had to have them. This has been a tough road stretch, but we are getting better.”

Junior Kade Harrington recorded another stellar performance. He carried the ball 20 times for 152 yards and one touchdown. It was his second 100-yard rushing performance of his career.

Senior Reggie Begelton hauled in eight passes for 95 yards and a score. The LU defense was led by senior Ronnie Jones’ 15 tackles. Sophomore Shawn Jones added 14 tackles, including one for a loss.

The game started as a tale of two halves. The Lions started quickly but struggled as the half worn on. It was the opposite end of the spectrum for LU. Big Red came out of the locker room sluggish but got stronger as the half progressed.

The Lions racked up 184 yards of total offense in the first quarter building a 13-0 lead. SLU wasted no time cracking the scoreboard when Jeff Smiley caught a D’Shaie Landor pass and took it 67 yards on SLU’s first drive of the game. Southeastern added to its lead at the end of the quarter when Landor scored on a 5-yard run to give the Lions a 13-0 lead after a failed extra point.

SLU had a chance to score two more times in the opening half, but a missed 31-yard field in addition to the missed PAT forced the Lions to go for it on fourth-and-goal from the 9 with 3 seconds remaining. The attempted failed with junior Larry Carroll stepped in the passing lane to bat the ball away.

The Cardinals’ offense finally came to life 4 minutes into the second quarter. Begelton capped a six-play, 80-yard drive with a 26-yard pass from junior Carson Earp. Big Red was back on the march 5:35 later when Harrington set up LU’s second score with a 55-yard run. Harrington punched it in from 3 yards out two plays later to give the Cards their first lead of the game, 14-13.

Harrington went over the 2,000-yard rushing mark for his career, joining the company of former Cardinals Burton Murchison, Sammy Carpenter and Doug Matthews. He is currently fourth on the school’s all-time rushing list.

The Lions had 184 yards of total offense after the first 15 minutes, but finished the half with just 209. The Cardinals recorded 152 of their 244 total offense yards in the second quarter.

The two teams alternated scores in the second half. The Cardinals got the scoring started with a 20-yard field goal from Alex Ball early in the third quarter. The Lions answered with a 40-yard field goal of their own, but the cheers were quickly silenced as Beaumont freshman Rodney Randle returned the ensuing kickoff 87 yards for a touchdown. The Lions pulled back within a point after Landor scored on a keeper from 5 yards out with 2:37 remaining in the quarter.

The Lions got the ball back minutes later and appeared to have regained the lead. The Lions had a receiver wide open in the end zone but the pass was dropped. On the very next play, junior Xavier Bethany picked Landor off on the 10-yard line.

The Cardinals took the ball behind the direction of senior Joe Minden, who was getting his first playing time since being hurt in the Baylor game, and he guided the Cards on a 13-play, 70-yard drive that ended with a Ball 20-yard field goal. The kick gave LU a four-point advantage, 27-23.

The Lions took their first lead since late in the first quarter when Kody Sutton capped a 17-play, 79-yard drive with 1:19 on the clock. LU got the ball back with one last attempt and moved the ball out near midfield following a 20-yard run from Harrington, but the drive stalled out.

Harrington wasn’t the only Cardinals’ player to hit a career milestone Thursday night. Begelton became the school’s all-time leader in receiving yards on his fourth catch of the night. He passed Ronnie Gebauer (1967-70) who held the previous mark at 2,098 yards.