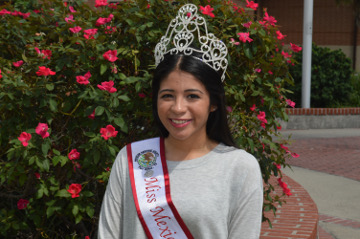 Briana Toribio, of Port Arthur, is this year’s Miss Mexican Heritage Society Queen. Toribio is enrolled at Lamar University where she is majoring in social work. Mary Meaux/The News

Briana Toribio has learned a lot about her heritage and culture through years of being a Mexican Heritage Folkloric dancer.

That knowledge — of the traditions and heritage of Mexico, likely helped her win the crown as this year’s Miss Mexican Heritage Society queen.

Toribio, 18, of Port Arthur, represented the state of Nuevo Leon, which is bordered by the states of Tamaulipas and Coahuila. For the recent pageant she wore a traditional forkloric dress of the state and performed a dance representing the state.

The dance, she said, was upbeat and similar to polka with lots of shoulder movements.

Toribio has participated in the pageant in previous years and even took the title of junior miss in 2012.

The folkloric dancing has been part of her life for the past seven years and is now a level three dancer.

“My mother made me do it,” Toribio said with a laugh. “I didn’t want to at first then I started participating in different events and now I’m obsessed. I plan to continue as a folkloric dancer as long as I can.”

The local dance group receives instruction by a Houston professional who comes to town every Sunday where they practice for two to three hours at a time.

“It’s a way to express myself and carry on tradition and heritage,” she said. “I’ve learned so many things I never knew before. My ancestry and why they dance certain ways. I strive to keep dancing, to learn more about my heritage and teach others.”

When Toribio isn’t dancing she’s busy with classes at Lamar University in Beaumont where she’s majoring in social work. She would like to work with children as a social worker either in a hospital or with Child Protective Services.

She also holds a job at Big Boi’s Crawfish Hole at Central Mall.

Toribio is from a close knit family that includes her mother Maria Pompa and several sisters. Besides dancing she enjoys playing tennis, participating with the Catholic Student Center at Lamar and volunteering and doing community service.

Toribio encourages other girls to take part in the Mexican Heritage Society pageant as a way to learn more about their culture and because the pageant awrds scholarships.