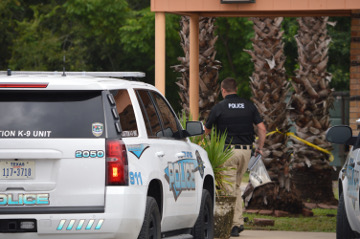 A Port Arthur Police officer walks toward a crime scene behind Royal Furniture in the 4200 block of Gulfway Drive. A man was found shot to death behind the business around 8:30 a.m. Tuesday. Mary Meaux/The News

Port Arthur Police are investigating a shooting death of a man who was found deceased behind a business Tuesday morning.

PAPD Maj. Raymond Clark said they received the call about 8:30 a.m. Tuesday, Sept. 29. It is believed the victim had been deceased for several hours.

A separate area in the 4000 block of Gulfway Drive is blocked of by police as they collect evidence possibly connected to the murder.

Clark said the victim appears to be a white male in his 40s. He has not been identified at this time.