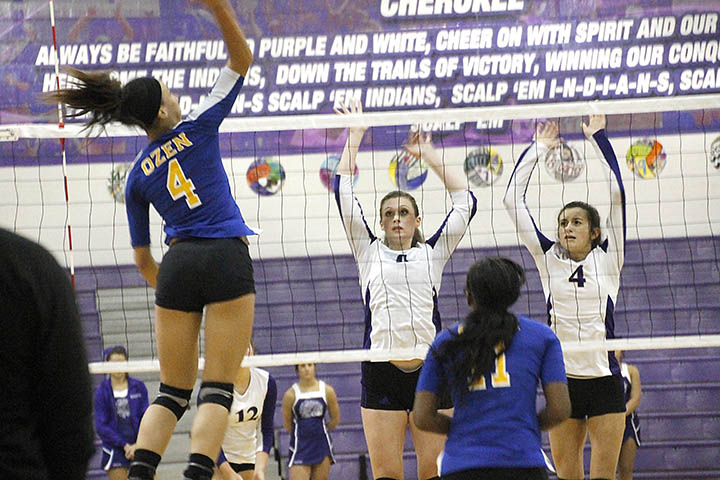 PORT NECHES — Momentum can be a great thing and in a flash, it can quickly disappear.
This is exactly what happened to the Port Neches-Groves Rock-A-Noos Tuesday night against the Beaumont Ozen Lady Panthers. The Rock-A-Noos won the first two games only to see the momentum and match slip away.
Ozen won the match in five games: 21-25, 22-25, 25-20, 28-26 and 15-13.
PN-G had its chance to win the match in the fourth, holding a 24-21 lead. That was right before Ozen’s Chelse Gloude assisted Alissa Johnson for two kills to make it 24-23.
The Rock-A-Noos next made an error to tie the game at 24-24 and from that point on PN-G had four more errors to hand the pivotal game to the Lady Panthers. Gloude finished with 43 assists for Ozen.
Errors once again cost PN-G in the fifth game. Ozen led 10-9 after Rock-A-Noos setter Libbie LeJeune set Carley Roccaforte for a kill.
PN-G then had three straight errors to give Ozen a 13-9 lead. It was too much for the Rock-A-Noos to overcome.
PN-G and Ozen are both 4-2 in District 22-5A play.
“We had the momentum and we let it slip away,” PN-G coach Barbara Comeaux said. “I knew coming in that Ozen was a very athletic team. For whatever reason, Ozen never gave up. They started fighting back and we made some mental mistakes. We couldn’t recover.”
LeJeune led all players with an amazing 48 assists. Jade Weatherford and Kailey Oliver both had 12 kills for PN-G while Jessica Harper finished with 32 digs.
Ozen’s Johnson led all players with 21 kills while Brittanie Cockrell had 13 and Tempestt Vaughn finished with 12 kills.
PN-G grabbed the momentum late in the first game behind the serve of Weatherford. LeJeune had a kill to put PN-G up 22-20 and then Ozen gave the Rock-A-Noos a point on an error. With PN-G up 24-21, another Ozen shot did not find its way over the net to give PN-G the 25-21 win.
Game 2 was just as close as the first. PN-G grabbed a little momentum with LeJeune serving and the Rock-A-Noos nursing an 8-7 lead. She hit for two straight aces, and then two Ozen errors gave PN-G a 12-7 lead.
Ozen later took the lead twice, yet a final Weatherford kill gave PN-G the 25-22 win.
Ozen took the lead for good in the third game at 13-12.
“I am proud of my kids for fighting because they did fight,” Comeaux said. “We cannot make those kind of mistakes in the end. We played a good team tonight. They hit the ball and we did not play defense. This is a tough loss but we are going to keep working and that is all we can do.”
PN-G is home against Goose Creek Memorial on Friday.