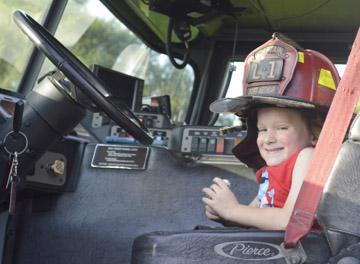 Aaron Cater, 6, sits in the drivers seat of a Port Arthur Fire department truck outside his home in June. Cater, born with spina bifida, wants to be a fire fighter when he grows up. Mary Meaux/The News

Aaron Cater, 6, has a special place in his heart for firefighters as they do for him.

Cater, born with spina bifida, wants to be a firefighter when he grows up and has visited several Port Arthur fire stations earlier this year.

Since the visit, members of Port Arthur Firefighters Local 396 have constructed a special playhouse to be auctioned off for Court Appointed Special Advocates of Southeast Texas Inc.

CASA has issued a challenge to the community — they are seeking 10 people or businesses to donate $2,500 during the current fundraiser Casas for CASA at Parkdale Mall.

“The goal behind the challenge is to support our mission here at CASA but to also have the firefighters of PAFD Local 397 build a special playhouse for Aaron Cater, Christy Heisner, resource development coordinator for CASA, said. 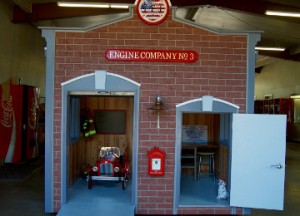 A playhouse constructed by members of Port Arthur Firefighters Local 396 for Court Appointed Special Advocates of Southeast Texas Inc. to be auctioned off this week at Parkdale Mall in Beaumont. CASA is seeking 10 people or businesses to donate $2,500 during the Casas for CASA fundraiser. The goal is to raise enough to have the firefighters build a special playhouse for Aaron Cater.
Mary Meaux/The News

PAFD Capt. Gerrit Achord is excited about the idea of presenting a fire station styled playhouse to Cater.

“I can’t tell you of a more deserving kid,” Achord, who is also a CASA volunteer, said. “This is a win-win for everyone because funds will be raised for the organization that stay local and everybody is coming together for a very deserving child.”

Gary Cater, Aaron’s father, said the boy has been fascinated with firetrucks since he was two or three years old.

“All he’s wanted to do is be a firefighter,” the father said. “He’ll have a blast in this firehouse playhouse. It would make his day.”

The father recalled bringing his son to visit two of the city’s fire stations for Aaron’s birthday. They ended up spending more than three hours meeting the firefighters and looking at the trucks.

Aaron Cater, whose lower limbs are affected by spina bifida, is an athletic 6-year-old that participates in baseball and basketball with Adaptive Sports for Kids.

Volunteers will be selling raffle tickets for the playhouses at Parkdale Mall and tickets may be purchased online this year at www.casasetx.org

The drawing for the playhouses will be at 3 p.m. Oct. 3 at Parkdale Mall.