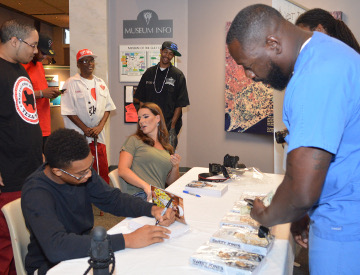 “I got to known him and felt like his story needed to be told,” Beverly said. 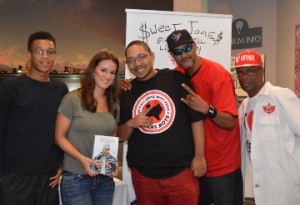 The author spent five years total on the book project; three years of interviewing and two years actually writing. Through that time she got close to the family. Working with Butler’s mother and manager, Weslyn “Mama Wes” Monroe, was the key, she said.

Sadly Monroe died in August 2013 before the book was published. Her husband and Butler’s step-father Millard “Pops” Roher remembers the two women sitting down for countless hours talking

“It was the thrill of her (Monroe) life,” Roher said from a seat at the Museum of the Gulf Coast during a book signing on Sunday. “They sat down and talked about the hardships, the good times and the bad times. This (book) is what she wanted. She wanted to see him cross the stage and receive a Grammy; well he was nominated for one. This is her Grammy.” 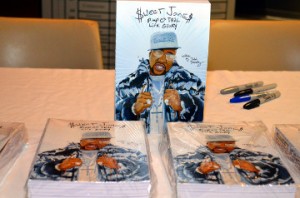 Butler’s sons, Chad Jr. and Corey, were on hand for the book signing where they lent their own signature along with the author’s.

“Anything that is true and positive in the memory of him is always great,” Chad Butler Jr. said.

Corey Butler enjoyed the book that tells a story most people don’t know, he said.

A number of fans lined up to purchase a copy of the book including Daryl Johnson. Originally from Georgia, Johnson now resides in Texas and has been a fan of UGK for many years.

“The book means a lot to me,” Johnson said. “I’ve followed the movement for a long time.”

Ray Riojas of Loz 409 Boyz is a Latin musician from Port Arthur who also picked up a copy of Pimp C’s biography.

“It’s all about Port Arthur, Texas. These musicians and rappers put Port Arthur on the map,” Riojas said. “It’s an honor to buy this book.”

David Beard, director of the Museum of the Gulf Coast, was pleased to host the book signing as he is any time books are written about the notable people featured in the Museum whether musician, sports person or politician as it shows the breadth and talent of our region.

Butler, along with childhood friend Bernard “Bun B” Freeman, made up the Grammy nominated duo UGK who were known for appearing with Jay Z on “Big Pimpin’” and for “International Player’s Anthem (I choose You).”