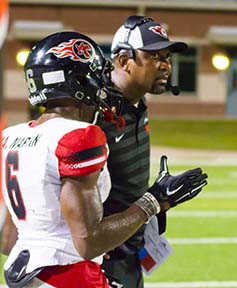 Deep down in the back of each coach and player, the Titans remember the first District 21-6A game last year.

Channelview was the opponent, and it was the Falcons who left Memorial Stadium with a 70-49 victory. The Falcons and quarterback Jalen Hurts, an Alabama commit, rolled up more thanb 700 yards of offense.

It might be a different year, but the Titans remember.

Now, it is up to this year’s crop of Titans to make sure the memory is put away for good. Memorial (1-3) travels to face Channelview (4-0) at 7 tonight.

Memorial coach Kenny Harrison made no excuses for last season’s loss but did point to a critical time in the game.

“We had some unfortunate things happen that help get the game out of hand,” Harrison said. “We were leading 42-26 in the third quarter and there was a face mask penalty that was not called while we were trying to run out the clock. It just was not called. They got life and took advantage of the opportunity. If we get the first down, I really don’t know if they have time or the drive to come back and do what they did. They got the momentum and it shifted really quick.”

Harrison also has had to game-plan for Hurts, who is very quick himself.

The senior son of Channelview coach Averion Hurts has 22 touchdowns this year and 1,354 yards of total offense.

“Jalen is very special,” Harrison said. “He is playing with a tremendous amount of confidence right now. I have watched him grow up and Coach Hurts and myself are friends. I saw him on the sideline when he was younger and have visited with him at his house. His expectation is to win and that is how he approaches every game. That is something I really admire him for as a young man.”

So how to you stop a player who seems to be unstoppable?

Memorial struggled through the non-district schedule. Even with a 1-3 record, Harrison has not once wavered from believing the Titans are a good football team and there is a good reason.

“This is the first time for a game we will have all 22 starters we penciled in during two-a-days,” Harrison added. “We had kids who were not starters penciled in who filled in, stepped up, played and played well at certain positions. I feel we are stronger because of it.”

Nederland football coach Larry Neumann gave a look as if he was trying to understand the question: Who did the... read more