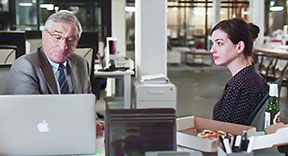 Two and a half stars

Director Nancy Meyers has a track record of making feel-good comedies that do well with mainstream audiences. If you enjoyed “It’s Complicated,” “Something’s Gotta Give” or “What Women Want,” then the odds are pretty good that you will also like Meyers’ latest film, “The Intern.”

Robert DeNiro plays Ben, a widower who is having trouble coping with his retirement, so he decides to head back into the workforce. He signs on as a lowly “Senior Intern” at a start-up fashion website, of all places.

Anne Hathaway plays Jules, the woman who’s running the show. She’s having trouble dealing with the pressures of expanding her online business. If only she had somebody who could advise her about the issues that threaten to bring her whole business crashing down…

Oh look, there’s Robert DeNiro playing a character so wise and benevolent that he immediately turns into a surrogate father figure for the entire company. He shows the young men how to dress, teaches them how to act around women, and he’s there to help Jules with her problems at the office, and at home.

“The Intern” is one of those comedies that is consistently amusing, but seldom laugh-out-loud funny. It generates mild chuckles in the way people of different ages see the world, but there’s nothing very perceptive about that. The film skates by on the undeniable star power of Anne Hathaway and Robert DeNiro, and they are quite appealing in “The Intern.” These are two performers who are more than capable of keeping audiences invested in the movie, even when the screenplay is somewhat mediocre.

That’s disappointing because there is plenty of comic material in the film’s central concept, as well as several interesting cultural issues that could have been explored. I kept waiting for the film to delve into actual drama, but “The Intern” is content with playing it safe. It ends up being a very likeable movie, but there’s nothing to separate this film from any of Meyers’ other very likeable but somewhat bland comedies.

That’s not necessarily a bad thing. I am perfectly fine with a movie that just wants to entertain its audience. Not every artistic endeavor has to aspire to be “War in Peace.” The problem is that while this film will work well with most mainstream audiences, those who are looking for explosive laughs or trenchant social commentary will find that “The Intern” only delivers mild, mostly-forgettable chuckles.

Movie reviews by Sean, “The Movie Guy,” are published bi-weekly in “The Port Arthur News” and seen weekly on KFDM and KBTV. Sean welcomes your comments via email at smcbrideatsbgtv.com.

THE MOVIE GUY: Depp is great, but ‘Black Mass’ is not

Once upon a time, a new Johnny Depp movie meant that you were guaranteed a night of solid acting and... read more