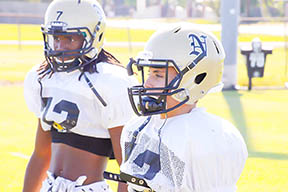 NEDERLAND — Every successful athletic team has an X-factor, and Nederland football coach Larry Neumann has given Dean Fisher that title.
“Everybody knows about [running back Austin] Krautz. Everybody knows about Perk [wide receiver Connor Perkins]. Everybody knows about [quarterback Mitchell] LeBaron, and our offensive line, which has been highly talked about. Guys like Dean, especially Dean, are the X-factors who may be a little under the radar, but they’re making plays.”
What few may realize is that Fisher — a first-year varsity player — leads District 22-5A teams in yards per catch heading into the start of league play.
“Definitely the coaches and definitely how the environment changes and how you have to step up to big receivers like [we had] last year and the year before,” he said, attributing the factors in his growth.
The junior hauls in passes at an 18.22-yard per catch clip (164 yards on nine catches, one touchdown). Classmate Perkins’ 15.9 (159 yards on 10 catches, two TDs) is third in the district, with Beaumont Ozen’s Emmanuel Smith coming in second at 17.89.
“We’ve grown in getting to know each other better, just knowing how to run routes,” the 5-foot-6 Perkins said. “We’ve gotten a new quarterback this year, so it’s kind of gotten hard to get used to him, but we’ve come a long way from the spring, and we know what we’re doing.”
For his part, senior LeBaron is second in total passing yards with 642 through three games, to go with six touchdowns. The air attack could just be warming up as the Bulldogs (1-2) open up 22-5A play at home Friday at 7 p.m. against Vidor (1-1).
“I know they’re going to come out and play hard,” Perkins said of Vidor. “They’re going to give it their best shot and we’re going to give it right back to them.”
Bulldogs wideout coach Bryan Spell and Neumann describe Perkins’ speed the same way: God-given. Neumann said Nederland relies on that quality for Perkins to stretch the field vertically.
“I think what can be overlooked with that talent is how much work he’s put in, in the springtime and summer going into fall camp in developing his hands,” Spell said. “He’s catching the football as good as we’ve ever seen him catch it, and that’s attributed to his hard work.”
As for the 6-foot-1 Fisher, Spell attributes his growth to the work he put in since spring drills.
“It carries into the fall, and he’s realized what his potential is,” Spell said. “The results speak for themselves.”
As the X-factor, Fisher brings a style of play that complements Perkins at their position, Neumann said. The two wideouts agree with their head coach they both bring a little something different to the table.
“Dean’s more of a big guy, so you’ve got to throw the short game up to him,” Perkins said. “I’m more of a fast guy, so you’ve got to throw a deep ball, maybe a quick-out, so I can make some moves and get out in open space.”
Yet, Fisher has learned a lot from his classmate.
“He’s always teaching me little tricks on how to get open on DBs and little releases and things like that,” he said.