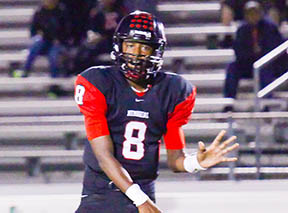 The Port Arthur Memorial Titans quarterback did not even want to step on the field.
He was not injured and he was not sick. He simply was so nervous he did not want to take the field and play the game.
Imagine that for a second. Kadon Harrison was a sophomore and was handed the reins of a Class 6A team that had to been to the playoffs for six straight seasons.
“I am not as nervous as I was last year,” Harrison said. “I was so nervous last year, I didn’t even want to go out there and play. It got to that point. As the year went by I got used to the game. It started with the Beaumont Ozen game. I was terrified.”
Harrison threw every pass last year in the Titans 56-0 win over the Panthers. He finished with 67 yards on 8-of-16 passing with one interception.
Kadon’s father and head coach, Kenny Harrison, was not aware the nerves got to his son so much in 2014.
“Knowing him and being around him, I never saw that,” Kenny Harrison said. “I can only imagine it knowing the type of kid he is, especially playing against teams like Houston Lamar and North Shore as a sophomore. We knew doing that and letting him get that experience, it would pay dividends this season and next.”
The turning point for Kadon, he said, came at Deer Park. The Titans lost 35-14 to the Deer yet he passed for 242 yards, the most in any game for Harrison as a sophomore. He was 18-of-34 with two interceptions and two touchdowns.
“The nerves started to go away when district started,” Harrison said. “The Deer Park game was a time when the game slowed down.”
Not only did Harrison deal with nerves a year ago, he was also battling a little thing called pressure.
He was the coach’s son. He was the quarterback. Quarterbacks are the most scrutinized players on the field and he was in charge of performing for a team looking to reach the playoffs.
“I felt like I let a lot of seniors down last year, especially Travon McClain,” Harrison said. “He could have had a lot more receptions last year.”
To be fair, McClain finished with 50 catches for 657 yards and seven touchdowns.
The Harrison-to-McClain combination had a special moment at the end of the Titans lone District 21-6A victory in 2014.
Harrison found McClain for the game-winning touchdown with 55 seconds left as Memorial defeated Baytown Sterling, 28-24.
“That was the highlight of the season for me,” Harrison said. “I went to the sideline before the play and my dad say to just throw the ball and chunk it. That is what I did but when I let it go, I thought the ball was thrown out of bounds.”
The ball did not go out of bounds and landed in McClain’s hands for the score.
Kenny Harrison said his son is starting to realize he has the physical tools to play the game of football at the 6A level.
“He understands he is a pretty good athlete,” Kenny Harrison said. “He can make things happen with both his arm and his feet.
“My wife (Latania) took him to the doctor maybe two years ago and they projected him to be 6-foot-5 so we always knew he would be a tall kid. That is one of the advantages he has.”
Latania Harrison has to be a very patient wife and mother. Her husband is the head coach and her son is the quarterback. This all equates to a lot of football talk in the Harrison household.
“Being the coach’s son is not as bad as it was last year,” Kadon Harrison said. “All we do is watch film all night. We have a room set up just for film. Mom has to tell us to stop all the time. If it wasn’t for her, we would go all night.”

Indians start 22-5A slate vs. Ganders

PORT NECHES — Now it counts. That is the theme for the Port Neches-Groves Indians handed down by coach Brandon... read more