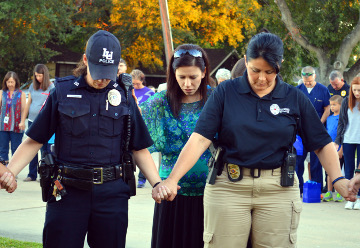 PORT NECHES — The now vacant fire station next door to the police station on Merriman Street was a gathering place for upwards of 250 people offering prayers for police officers during See You At the Station in Port Neches on Wednesday.

Officers assembled around the flagpole and held hands as individuals and pastors offered prayers in the early morning hours. 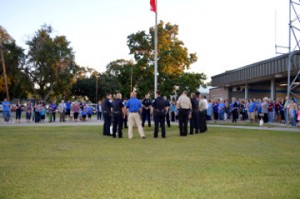 Port Neches Police officers surround the flagpole at the vacant fire station while surrounded by community members during See You At the Station on Wednesday.
Mary Meaux/The News

Brenna Boyd walked to the circle of officers and placed her hands on two of them; Lamar University Officer Lindsey Johnson and Port Neches Police Officer Cheri Visser, during prayer.

Boyd explained is was her faith that led her to pray directly over the officers.

“It’s one thing to pray over someone but another to lay hands on someone while praying,” Boyd said.

Bonnie Evans also approached the circle of men and women in prayer. She likened the laying of hands during prayer to a connection between God and the person being prayed over. 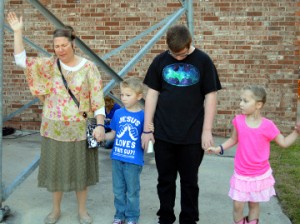 See You At the Station — which features a logo of a police officers shield and time and date of the event became a Facebook favorite and spread like wildfire, Jennifer Bartlett, an organizer who helped share the event, said.

Bartlett’s childhood friend Beth Armstrong, who lives in another area of the state, came up with the idea after a recent killing of a police officer. Patterned after “See You at the Pole” where school students meet for prayer one day a year, See You at the Station called for individuals to go to their local police stations for prayer.

“I call it a God inspired event made possible through my friend’s obedience,” Bartlett said. “Southeast Texas latched on to the idea. I like to say her obedience sparked the wildfire.”

The idea, she added, started in Waco and “all I did was share the event.” 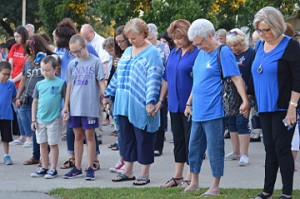 Crowds hold hands and pray during See You At the Station in Port Neches on Wednesday.
Mary Meaux/The News

Port Neches Police Chief Paul Lemoine, who welcomed the group, said he is proud of how the Port Neches community always comes together to support the police, firefighters and city.

Lemoine said that when he first spoke with Bartlett as she planned the event he reminded her the officers are called to do this duty.

“No matter what, good or bad, they go out there every day no matter what. They don’t do it for the recognition,” Lemoine said. “yes they have a sworn duty to do what they are called to do. That’s the different, the thin blue line separating good and evil.” 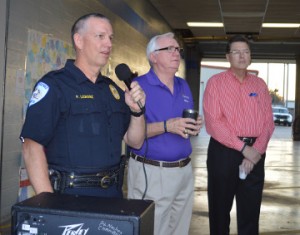 Port Neches Police Chief Paul Lemoine, left, greets a crowd of citizens prior to prayer along with Mayor Glenn Johnson and The Rev. David Mahfouz of First Baptist Church Port Neches during See You At the Station in Port Neches on Wednesday.
Mary Meaux/The News

In nearby Nederland, Police Chief Darrell Bush offered thanks to the many people who turned out to the Nederland event.

“We had recently become discouraged because of the events going on around the country. However, after the last few weeks and today, and the love and encouragement shown by our citizens, we are uplifted,” Bush wrote on the department’s Facebook site. “Words cannot express the appreciation that my officers and I have for our community’s prayers and support. Today made each of us feel that we are valued and that we are making a difference. I hope that God blesses each of you as you have blessed the Nederland Police Department.”

Groves Police Department also thanked the citizens who came out to support and pray for Groves officers and law enforcement across the country during these challenging times.

“We cannot thank you enough for taking time out of your day to show your appreciation,” according to the GPD Facebook post.