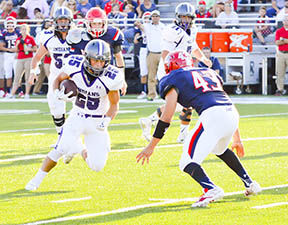 Indians start 22-5A slate vs. Ganders

PORT NECHES — Now it counts.
That is the theme for the Port Neches-Groves Indians handed down by coach Brandon Faircloth.
Yes, the Indians march into Stallworth Stadium at 7 p.m. to face the Baytown Lee Ganders with a 2-1 record yet it does not matter in the long run.
What the Indians do for the next seven games is what will define the 2015 season.
“Non-district games don’t mean anything,” Faircloth said. “Week to week, everything changes. This is a brand new season for all of us. Baytown Lee is a very capable football team. It is proven every week that if you don’t play well anyone can beat anyone.
“This is the season. What we say around here is those three games matter but don’t count. The district games matter and they count. We are ready for them to county. We have high expectations and we have to go out and improve every day. It is a dogfight every game from here on out.”
The Indians start the district schedule without two of their best players. Linebacker Trey Rembert and receiver Keynel McZeal both left last week’s victory over Chapel Hill with injuries that will keep them out for at least a couple weeks.
Rembert has a knee injury while McZeal is nursing an injured wrist.
“Those injuries are unfortunate,” Faircloth said. “We don’t know how long they will be out. As a team, we cannot replace Keynel McZeal and we can’t replace Trey Rembert. As a group, we have to overcome that together. That is life and that is adversity. We have to find the guys who can step up and play and that is what we are going to do.”
Tonight the Indians face maybe the best duel-threat quarterback in District 22-5A in Lee’s Javarius Irving. Irving has offers from Stephen F. Austin University and McNeese State University.
Irving has rushed for 318 yards on 44 carries with three scores and has 575 yards passing on 49-of-85 passing with six touchdowns and two interceptions.
“He (Irving) is very athletic,” Faircloth said. “They snap it to him every down so our defense is going to have to do a good job of getting to him and tackling him befcause he can run really well.”
Irving’s favorite receiver has become sophomore Victor Clark. Clark has all six of Irving’s touchdowns through the air and has 303 yards on 17 catches.
“You have to cover him and maybe with a couple guys,” Faircloth added. “He is a good player. They get him the ball. We have our work cut out for us with him.”
Faircloth said he was pleased with his team’s effort against Chapel Hill considering the Indians did not play an opponent the previous week.
“I was proud of our kids for not showing any rust,” Faircloth said. “Every year after a bye week is different. You never know how they will respond. We have a bunch of seniors so they responded the right way. I was really proud of how we started the game. We got the ball and went down and scored.”

NEDERLAND — Every successful athletic team has an X-factor, and Nederland football coach Larry Neumann has given Dean Fisher that... read more