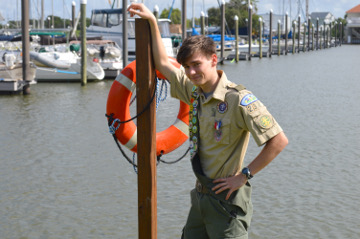 Newly inducted Eagle Scout Sean T. Chapman stands near one of the life rings he refurbished as part of his project at the Port Arthur Yacht Club. Mary Meaux/The News

Born in Galveston and raised in Crystal Beach, Chapman came to Nederland after Hurricane Ike destroyed his home and his family’s business, DeCoux’s Pub and Restaurant. Becoming a Boy Scout was something his mother, Suzy Chapman, felt was a good idea since her son was starting new in a different city.

“Scouting was a really good avenue for Sean,” Suzy Chapman said. “After the hurricane my kids’s social structure was gone.”

Chapman, a member Boy Scout’s of America Troop 232 of the Sabine District, is also a Sea Scout and his connections with Port Arthur Yacht Club helped form his Eagle Scout Project. His total project includes constructing PVC cart storage containers, refab life rings to be placed around the marina, environmental landscaping and building a rigging box for the yacht club.

Paul Vera, chairman of the yacht club’s junior sailing group/racing group and on the board of directors for the yacht club, was pleased with Chapman’s work and also enjoyed watching Chapman take a leadership role.

The project itself started with an idea that had to be approved by the scouting organization.

“One key aspect of an Eagle Scout is the concept to show leadership,” Hidahl said.

Once the project was approved it was up to Chapman to obtain the materials and sponsors some of which include Ritter Lumber, Parker Lumber and Gulf Coast Market. Chapman also worked with the Jefferson County Master Gardeners who educated Chapman about different soils and various plants best fit for the environmental factors at the yacht club. In turn, the scouts volunteered for a Master Gardener sale.

Chapman was inducted to the rank of Eagle Scout in a ceremony held at the Knights of Columbus Hall in Nederland, his hometown, in September. Since then he has received letters of congratulations from U.S. Senator Ted Cruz, U.S. Rep. Randy Weber, martial artist and actor Chuck Norris and television host and actor Mike Rowe.

In addition, the city of Nederland proclaimed Sept. 12, 2015 as Sean T. Chapman Day.

Chapman, a high school senior, plans to attend Lamar State College-Port Arthur for an associates degree in general education then move on to Lamar University in Beaumont to further his education.

Website to help ‘StopDrugs’, citizens can log-in anonymously with tips, learn about drugs

BEAUMONT — A new StopDrugs Website Project has kicked off and officials have already received the first of what they... read more