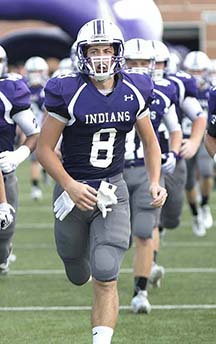 PORT NECHES — Caisen Sullivan can remember his first touchdown as a Port Neches-Groves Indians wide receiver.
It was Stallworth Stadium in Baytown against the Lee Ganders.
His teammate, Jack Giblin, had gone down with a season-ending injury the game before in Lufkin against Tyler Chapel Hill.
So naturally Sullivan’s workload was going to increase as coach Brandon Faircloth looked to fill the hole.
“We moved Caisen over to be the outside guy,” Faircloth said of his favorite memory of Sullivan’s career. “First drive of the game, they (Ganders) jumped offside and Adam (Morse) threw it up and Caisen made the best diving catch I have ever seen. Probably, the best catch I have ever seen.
“He was already a starter. He got inserted in that spot and the first time we throw to him he made that highlight reel catch. He has been doing it ever since.”
PN-G’s No. 8 said the catch was one of the highlights of his career.
“The best part was making the play and then hearing ‘Cherokee’ being played,” Sullivan said.
Sullivan added the injury to Giblin was huge and the void missing stuck with the Indians throughout 2014.
“We all had to pick it up because Jack is a great receiver,” Giblin said. “To replace him, we all had to step up.”
Sullivan has 13 catches on the season for 189 yards and one touchdown. He ended the 2014 season with 52 receptions, seventh most for a PN-G receiver in a single season, and put in 617 yards and five touchdowns.
Sullivan and the Indians receivers now find themselves in a spot to fill a gap again as Keynel McZeal was injured in the Chapel Hill game last Friday. The timetable on McZeal’s return off a wrist injury has not been set.
“It is the same situation,” Sullivan said. “We don’t ever want to play in Lufkin anymore.”
Faircloth was quick to say how special of a player he thinks Sullivan has become in his second year starting for the Indians.
“He is a special player,” Faircloth said. “We knew even last year he would be a big part of our offense. We had the injury and he stepped up and did great. He is very consistent and he has the best hands maybe in Southeast Texas.
“He doesn’t care if we only throw it to him three times a game but I promise we are going to throw it to him a lot more than that. He cares about winning. His attitude is always the same. He never comes and asks for us to throw him the ball.”
Sullivan has grown into a great possession receiver, similar to Wes Welker in the NFL. If the Indians are facing a third down-and-seven, Sullivan usually ends up catching an 8-yard reception for a PN-G first down.
“We don’t call the play to a certain receiver, usually,” Faircloth said. “But, Adam sure seems to find him a lot. They have a great connection and those things foster from 7-on-7 and those things. That helps our guys and it has helped him become a really good football player.”
Sullivan said: “I just try to be reliable on the field.”
Sullivan grew up a true Indians fan. The players he watched as a kid were his heroes.
“I always watched PN-G football,” Sullivan said. “I came out and watched and the players were like superheroes. Spencer Deron was one of the guys I looked up to. It was crazy. It was what I wanted to do when I grew up.
“Scoring touchdowns is always fun. I love making the big plays. It is crazy I am already a senior. Freshman year seems like it was last year.”

Nederland powers past PN-G in 4

NEDERLAND — Marlie Lee had her best match of the season. Port Neches-Groves, meanwhile, might have had its worst match... read more