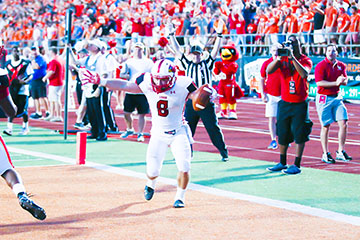 Lamar Cardinals running back Kade Harrington celebrates a touchdown in the team’s victory over No. 3 Sam Houston State University Saturday in Huntsville.

HUNTSVILLE — The game of Kade Harrington’s life resulted in Lamar’s biggest victory in its football resurrection.
Harrington rushed for a career-high 230 yards and two touchdowns, including 73 yards on a crucial fourth-quarter score that gave the Cardinals needed insurance, and Lamar stunned third-ranked Sam Houston State 49-46 before 10,116 Saturday night.
The Bearkats (0-2, 0-1 Southland Conference), the defending Southland Conference co-champions along with Southeastern Louisiana — Lamar’s next opponent — had won 27 of 28 in Bowers Stadium before the defeat. They were ranked No. 1 in the STATS FCS Top 25 poll last week, when they were off following a 59-45 loss at Texas Tech.
“It just puts us on the map,” Harrington said, “and I think it just shows how far we’ve come, basically getting blown out by them last year [42-10 in Beaumont]. To come here and play completely night-and-day better as a completely different football team, I think it shows how much we’ve grown and how good we can be.”
Cardinals coach Ray Woodard, the architect of Lamar’s football revival, has the signature victory he’s been looking for … not that he immediately reflected on it.
“I haven’t had time to put it in perspective,” he said, his team beating the highest-ranked opponent since the team’s 2010 resurrection. “I would say so, yeah, it has to be [the biggest win we’ve had here].”
Earp, the junior transfer from Navarro Junior College, started under center for the second straight game after first-game starter Joe Minden was ruled out for at least a month with a hand injury. He had 223 yards and four touchdowns on 14-of-25 passing, threw no interceptions and did not take any sacks.
“We brought it to them,” he said. “We were physical, and our freaking O-line and Kade Harrington, they were studs tonight.”
Harrington’s rushing yards are the second-most in a game for the Cardinals and most since 1985, when Burton Murchison turned in 259 on 31 carries against Rice in 1985. Murchison had three 200-yard games and a 199-yarder that season.
“He’s the man,” Earp said. “He was the man tonight.”
The Cardinals (2-1, 1-0), who earned just a few votes in the STATS poll, also made history with the shocker. They defeated Sam Houston for the first time since 1989 — their last season before folding the program — and won in Huntsville for the first time since 1959.
They gained 261 total yards in the second quarter, outscoring the Bearkats 21-0 en route to a 35-14 halftime lead. Lamar, which had 551 yards to Sam Houston’s 560, never trailed but was never safe, either.
“We were running the ball up and down the field to keep the ball away from them, but we didn’t do that in the third quarter,” Woodard said. “I think that was the biggest difference between the first and second halves.”

Earp recovered a bad snap from his own 15 into the end zone for a safety, pulling the Bearkats within 35-25. Luckily for the Cards, they managed to force a pair of punts.
Enter Harrington, the 5-foot-9, 2013 College Sports Journal Freshman All-America.
He took a second-and-8 handoff and rushed for 44 yards to the Bearkats’ 27, and two plays later Carl Harris darted 27 yards to push the lead up to 42-25 with 9:17 left.
Still, Lamar was not out of the woods, figuratively or literally.
Jared Johnson, who threw for 235 yards and two scores sharing snaps with Jeremiah Briscoe, engineered a five-play, 75-yard drive in 92 seconds to pull the Bearkats back within 10. After a three-and-out series for Lamar, Johnson threw passes for 65 yards to set up his 16-yard scamper into the end zone at the 3:21 mark.
Harrington went back to work. Three plays from scrimmage later, Harrington stutter-stepped and avoided contact down the Cardinals’ sideline on a 73-yard insurance touchdown with 3:21 left.
Johnson made it 49-46 on a 6-yard carry to cover 70 yards in six plays with 58 seconds left, but Sam Houston’s ensuing onside kick bounced off one of its own players before going 10 yards, allowing Earp to take three knees to run out the clock.
Lamar’s defense helped set the tone for an upset holding Sam Houston to no yards on the game’s opening drive. Both teams traded scoring blows on the next four series, with Reggie Begelton hauling in 4- and 19-yard TD passes from Earp.
“It was just our kids,” Lamar defensive coordinator Craig McGallion said. “They were prepared for this game. We’ve been pointing toward it since we kicked off fall camp.
They came to play. The coaches put together a really good gameplan, and it was a complete team effort.”
Harrington’s first big play was 77 yards on a screen pass that put the Cardinals in front for good. He scored again on the Cardinals’ next possession and Earp followed that up with an 18-yard scoring pass to Devonn Brown to make it 35-14.
Brown had 101 yards on four receptions. Begelton had 24 yards and needs 52 more to become the Cards’ all-time leader in receiving yards.
Yedidiah Louis caught six passes for 151 yards.