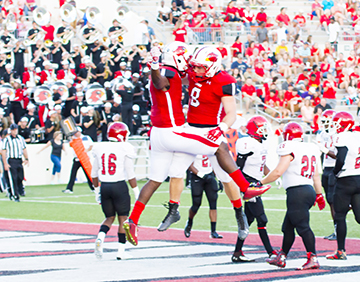 Kade Harrington (8) and the Lamar Cardinals are looking to upset the Sam Houston State Bearkats in Huntsville today.

Visit to No. 3 SHSU will indicate Cardinals’ real strength

Tonight, the Lamar Cardinals will find out for themselves how they stack up against a program their own size … even if the Sam Houston State Bearkats are the third-ranked team in the Football Championship Subdivision.
Cardinals coach Ray Woodard can only hope their season-opening blowout against an NAIA program and subsequent date with the Big 12 — in which Lamar made a great first impression — is enough preparation.
“I think the Baylor game has done a couple of things for us. I don’t think we knew all about our team after Bacone in that we weren’t thrown in a fire and had to face adversity,” he said. “I had to see what it was like when we got hit in the mouth and some of those things at Baylor. I think we got a little more confidence Monday than if we had to play right after Bacone.”
Said senior cornerback Seth Ellis, who picked off a pass against Baylor: “We just want to see how good we can play and how well we can perform on the field. I feel like we’re getting good. Every week that goes by, we keep on preparing and, like, our game plan has been going good.”
The fact that the Bearkats (0-1), who lost at Texas Tech 59-45 two weeks ago, are a good football team should be what Woodard called “an easy sell.” Their recent history alone — three conference championships and three national championship finals in the past four years — speaks for itself.
K.C. Keeler, who won a national title at alma mater Delaware in 2003, took over the Bearkats in 2014 and has them in the higher echelon of FCS football. They’ve won 27 of their last 28 at home, 45 games overall since 2011 (most by a Texas Division I team) and beaten Lamar in five meetings since the Cardinals’ return to the sport in 2010.
If the Cardinals can have the same strong start it had last Saturday at Baylor, history won’t matter for the Bearkats.
“Lamar has a good football team and they showed it last Saturday,” Keeler said in a news release. “They had some holes to fill and it appears they filled them well. We can’t take anyone lightly on our schedule this year.”
Yet the Cardinals (1-1) will go into Bowers Stadium missing at least a couple of key elements.
Junior defensive end Manasseh Miles is out for the season with a knee injury suffered last Saturday. His absence shakes up a three-man front that awaits the game-time status of nose tackle Omar Tebo, who’s day-to-day.
Quarterback Joe Minden is out with a hand injury for at least a month, leaving junior transfer Carson Earp to take the keys to the offense all by himself. Earp is a solid run-and-pass threat, but Minden proved a more accurate and productive passer with 267 yards and four touchdowns on 24-of-31 passing in two games. Earp has completed 15 of 25 for 161 yards and two TDs with no interceptions, but his 8.3 yards per carry is a more striking statistic.
Minden’s loss pre-empts a battle of two-quarterback systems. Jared Johnson and Jeremiah Briscoe shared time for Sam Houston at Texas Tech, combining to complete 36 of 52 passes for 320 yards with two picks. Briscoe was the more accurate passer going 18 for 24 with the lone passing score, but Johnson’s a good runner as well with 80 yards on 13 carries.
Unlike Lamar, Sam Houston didn’t have the fortune of leading on a Big 12 team’s home turf, but the Bearkats were tied with the Red Raiders twice and were within four points three times before a big third quarter by Texas Tech.
“They just concern me because they’re a very good offense,” Woodard said of the Bearkats. “I wouldn’t say they’re run-first, pass-second, but I would say their run game sets up their passing game. Briscoe gives them an added dimension in the passing game. Johnson can throw the football and will throw the football. … Those two quarterbacks are similar to what we have in that both quarterbacks bring something different to the table.”

Sound bytes
• Lamar coach Ray Woodard, on whether this is his biggest Southland Conference game yet: “That’s tough to say. I don’t know if any of them can get bigger than the first year [2010], when you’re doing everything for the first time. … I talk to the coaching staff about it, whatever happens this week, us and Southeastern [Louisiana] will take a week off and go at it, and that’s going to be a big game. We’ll be right back here talking about how big that game is.”
• SHSU coach K.C. Keeler: “We’ve told the kids that every day we have to win the day. Maybe it’s a cliché but it’s true. We have to take things one day at a time. We have to win each day’s practice and get better. Then we have to win the day on Saturday.”