THE MOVIE GUY: Depp is great, but ‘Black Mass’ is not 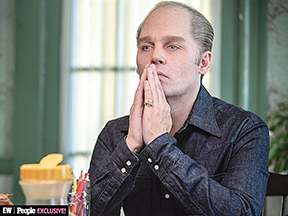 I am happy to report that the newest Johnny Depp movie, the crime biography “Black Mass,” allows Depp to once again showcase his considerable acting talents. It’s wonderful to see this talented actor doing serious work. Of course he is still acting while buried under a mountain of strange-looking makeup, but let’s be grateful for small steps in the right direction.

“Black Mass” tells the real-life story of Whitey Bulger, the South Boston crime boss who was a permanent fixture on America’s Most Wanted posters until he was finally apprehended in 2011. Depp plays Whitey, and Joel Edgerton plays a childhood acquaintance who becomes a Federal agent and then makes Bolger into his informant. Basically, the Feds agree to forgive Whitey’s numerous misdeeds as long as he gives them information about other Mafia figures.

Things don’t go as the FBI had planned.

“Black Mass” is a story that is focused on evil, and how it corrupts everyone it touches. I am pleasantly surprised that the filmmakers didn’t try to romanticize Whitey Bulger as a modern day anti-hero. They know that they are making a movie about a very bad man.

Credit Depp for understanding this and giving us a portrait that is unapologetically evil, but still fascinating to watch. This is a portrait of a predator who kills without remorse, and might have been a cardboard character in the hands of a lesser actor.

Then again that makeup job seems to be intent on turning Whitey back into a cartoonish stereotype. From the ice-blue contacts to the unconvincing bald cap, it’s hard to take a performance seriously when the images up on the screen are so unconvincing.

I also wasn’t entirely convinced that “Black Mass” had anything new or interesting to say about organized crime. That’s a bit strange as this is a very talky film. I found that I really didn’t care what any of the characters had to say.

“Black Mass” might have generated more interest if they had spent more time showing us the relationship between Whitey and his straight-arrow brother (Benedict Cumberbatch) or had given women anything to do other than be side-characters, usually mothers or prostitutes. But no, this is the story of one specific character and how he tainted everything he touched. Depp’s performance is quite good, but his character wasn’t strong enough to make me want to stay with “Black Mass.”

Movie reviews by Sean, “The Movie Guy,” are published bi-weekly in “The Port Arthur News” and seen weekly on KFDM-TV. Sean welcomes your comments via email at smcbride@sbgtv.com.com.