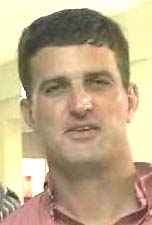 A standout member of the 1999 Port Neches-Groves state finalist football team has died.

Chris Gohlke died Wednesday. Jefferson County Justice of the Peace Precinct 7 Brad Burnett said the cause of death had not yet been determined. Funeral arrangements are also pending.

Gohlke played free safety for the Indians and was a key part of the team that lost 28-18 to Art Briles and Stephenville in the Class 4A state championship.

Former PN-G head football coach Matt Burnett was shocked when he learned of Gohlke’s death from his brother, Brad Burnett.

“I loved Chris and I love his family,” Matt Burnett said. Burnett and Gohlke’s father, Rick Gohlke, were teammates at Lamar University and both coached in the PN-G school district.

“Chris was a great inspiration and a tremendous athlete,” Burnett said. “I loved him so much. I went and saw the family last night and hugged and cried with Rick. It is a complete shock. I am sad. What a great person. We had a lot of leaders on that team and Chris was at the top of that list.”

Burnett told the story of the time he once had to pretend to chew out Gohlke on the sideline of a playoff game against La Marque.

“Chris personally intimidated that entire La Marque team right before half,” Burnett said. “They ran a post route, Chris hit the receiver so hard and the ref threw a flag. I called Chris over to the hash and I theatrically chewed him out but really was not griping at him. I told him how he just intimidated that team and we just won the game because of it.”

PN-G went on to win the game, 22-6. La Marque had been to five straight state title games and won the championship from 1995-97.

“La Marque had a tremendous team and great talent,” Burnett said. “The whole thing they had was hype. Chris Gohlke took that away from them with that hit. He was such an inspiration to our team.”

Teammate and friend Blake Hopper said he was saddened by the news. Hopper played offensive tackle on the 1999 squad.

“Life is so precious,” Hopper said. “I talked to him a week ago and I never thought that would be the last time.”

Hopper became teammates of Gohlke’s in 1996 as freshmen at PN-G High School. Hopper was a Groves boy while Gohlke attended Port Neches schools.

He said even before the two officially met when they both attended the same high school, he had already heard of Gohlke’s fierce football reputation.

“We (at Groves) knew he was the beast from Port Neches,” Hopper said. “He always lived up to that billing.”

Hopper and Gohlke both played on the varsity team their junior and senior seasons.

“We did something we never thought we would accomplish,” Hopper said of making the state championship. “Chris would hit you hard and hit you often. He wanted those receivers afraid to go across the middle of the field. He wanted people looking for him. He lived for that.”

Kyle Segura, director of transportation at PN-G ISD, coached Gohlke and spent time with the family on Thursday.

“They are doing how you would expect,” Segura said. “It is such terrible news. My son (Kyler Segura) always called Chris a superhero.”

Segura said for many years Gohlke hosted a camp for local youngsters to learn the sport of football.

“He took that camp and ran with it,” Segura added. “The kids worshipped Chris. He was a kid you always looked up to.”

Segura said the 1999 playoff run is still talked about within the Port Neches-Groves community.

“Chris made a name for himself during that run,” Segura added. “You didn’t want to run across the middle when he was around. He loved to hit.”

Current PN-G coach Brandon Faircloth had the opportunity to know Gohlke. Gohlke worked as the summer strength and conditioning coach for the Indians for Faircloth’s first three seasons as head coach.

“It is a devastating loss,” Faircloth said. “He was a special player and person. He always wanted to give back to PN-G. He loved the Indians and we are all saddened by his death.”