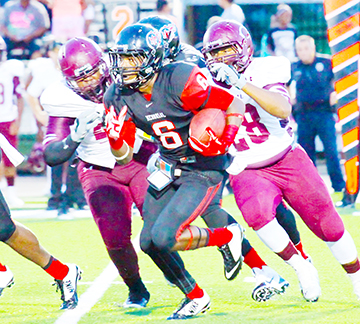 Add Ohio State into the mix of schools across the nation wanting Kameron Martin on its roster starting next season.
No matter what school comes calling, the Port Arthur Memorial senior running back says he is headed to Waco.
Charlie Strong and the Texas Longhorns even tried to get Martin to flip. Texas got close yet after talking to Baylor coach Art Briles, Martin has all but sealed the deal in his commitment with the Bears.
“I was 15-years-old,” Martin said. “It is crazy. Now that I have been committed for two years, it is a blessing. My mother and family do not have to pay a dime for college. It is all free.”
The commitment to Baylor was put into at least some question when Martin’s favorite school as a child, the University of Texas, sent an offer.
“I feel like Baylor is the place to be,” Martin said. “I have a great relationship with Coach Briles and the entire staff. My running back coach told me they did not recruit any other running backs coming from the 2016 class so if I decommit it would really hurt them. It made me feel special. They are only taking me so when I become a senior I have a chance to be the main man.
“Getting the offer from Texas felt great. I still have a big Texas flag in the middle of my room with Jamaal Charles’ signature on it. It is still not over. I am still getting contacted by Notre Dame, Ohio State and Texas. They don’t care about a tattoo. I don’t want to look stupid with a Baylor tattoo on my arm sitting in Austin.”
So with the number of offers Martin has received since he was a sophomore, he has yet to feel too much pressure while playing for the Titans.
“I feel like the pressure is from God,” Martin said. “He put all this on me. He put this in front of me and you have to stay humble with each situation. He can take it away from me.”
Martin’s Memorial coach, Kenny Harrison, has enjoyed watching Martin over the years. He also has learned a thing or two from No. 6.
Martin is well known for his use of social media. The hashtag #TeamKamMartin can be seen at almost every Titans football game.
“He got me on social media,” Harrison said with a laugh. “I have learned a lot from Kameron. I didn’t know anything about social media before Kameron Martin. He told me it was time to get out of the old ways.
“It has been very special to coach Kameron. He has been a great kid to be around and I have enjoyed every minute.”
Martin has wanted to be in this position since he was in middle school. He watched a former Beaumont Ozen Panthers star who is now playing for Alabama.
“I remember being in eighth grade and working hard,” Martin said. “That is when I put all them goals together and now all the goals are coming true. I was nervous the first game. My goal was to come out and do what (former Beaumont Ozen cornerback) Tony Brown did. Tony got offered by LSU and I wanted to get offers.”