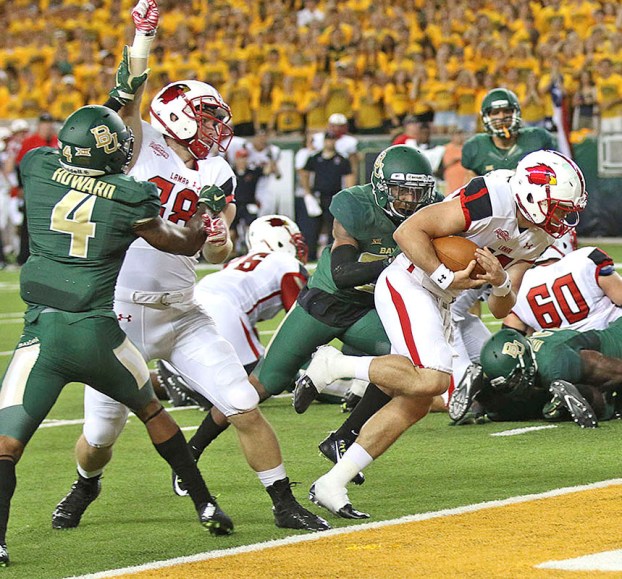 Lamar quarterback Joe Minden scores a 1-yard touchdown run late in the first half against Baylor on Saturday in Waco. The extra point tied the game at 21-21. (Special to The News)

For a moment … Lamar hangs with Baylor before Coleman shines

Coleman then made sure Russell hadn’t forgotten about him.

“He’s just a freak athlete,” Russell said. “He didn’t get the ball the first couple of series, and he let me know.”

Coleman went on to set a Baylor record with four touchdown catches, all of them coming at crucial points and the fourth-ranked Bears finally shook off FCS team Lamar for a 66-31 win in their home opener Saturday night.

The third series began with a 20-yard catch by Coleman, who caught a 42-yard touchdown two plays after that to break a 7-all tie.

“I’m just a very passionate player,” said Coleman, who finished with six catches for 182 yards. “I like to get involved. It wasn’t coming my way early.”

Even without their offensive coordinator at the game, the Bears (2-0) followed up their 723 total yards in the opening 56-21 win over SMU by outgaining Lamar 785-340 with their second-highest total in school history.

Baylor had 412 yards rushing with three 100-yard gainers. There were two 100-yard receivers among the 373 passing yards.

Offensive coordinator and play-caller Kendal Briles and receivers coach Tate Wallis were both suspended for the game by coach Art Briles, the coordinator’s father, and weren’t even allowed to be at the stadium. It was determined that the two committed a violation related to evaluations of prospective student-athletes during the recruiting period last spring.

“It all worked out well enough,” Art Briles said being without two full-time assistants.

Russell completed 22 of 34 passes for 342 yards, with the four TDs to Coleman. But the junior quarterback also had four turnovers in his third career start, with three interceptions and a lost fumble.

That includes all seven games the two-time defending Big 12 champion Bears have played in McLane Stadium, the campus venue on the banks of the Brazos River they moved into last season.

Seth Ellis intercepted Russell’s pass in the second quarter on a play when there was miscommunication with Coleman. That led to Joe Minden’s 1-yard keeper that tied the game at 21 with 4:34 left in the first half.

Less than a minute later, Baylor had a 61-yard touchdown. Russell hit Coleman in stride a couple of steps behind Ellis near the 25.

Kade Harrington’s second TD run, set up by Russell’s fumble, put Lamar up 14-13. But the Bears came right back with a three-play drive which ended with Coleman’s 21-yard touchdown. Coleman’s 34-yard score to open the second half made it 42-21.

Johnny Jefferson and Terence Williams each ran for 121 yards and Jay Lee, who had touchdowns on all three of his catches in the opening 56-21 win at SMU, had nine catches for 111 yards.

Lamar (1-1), in its sixth season since reinstating its football program, has now played a Top 25 team in three consecutive seasons. The Cardinals were outscored 132-6, with a field goal in each game the past two seasons — at Oklahoma State in 2013 and Texas A&M last season.

“I thought we had a great mindset going into this game. We seemed to be a mentally-tough team going in here,” coach Ray Woodard said. “We didn’t back down, and that will carry over.”

Finally, the NFL is back. It all kicked off Thursday as the New England Patriots defeated the Pittsburgh Steelers, 28-21.... read more