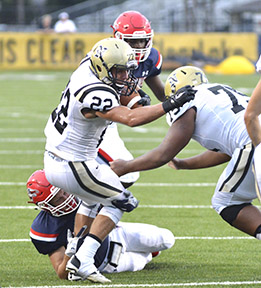 LEAGUE CITY – Coach Larry Neumann and fans of the Nederland Bulldogs had to wonder where the defense was after the Black and Gold gave up 90 points in a pair of season-opening losses.  No more questions about the defense.  It was apparently hiding in League City.

Austin Krautz rushed for 148 yards and three touchdowns and Mitchell LeBaron threw for three more Friday night to power Nederland to a 48-3 rout over Clear Lake at War Memorial Stadium.

The Bulldog defense limited the Falcon offense to three first downs, two in the first half, one in the second half and sixty-eight total yards on offense.

“We knew that our defense was better than we showed in the first two games,” said Neumann, whose team improved to 1-2 and have next week off before beginning district play the following week against Vidor.  “And we reminded them at halftime what happened last week and we didn’t want to see anything like that again.”

Krautz scored on runs of 10, 38, and 51 yards and spent the fourth quarter watching his underclassmen teammates gash holes in the Falcon defense.

Sophomore Sean Nguyen added 107 yards on 11 carries, including a dazzling 51-yard run in the first half that set up Nederland’s second touchdown.

“He’s had a cast on his wrist until this week,” Neumann said.  “He is a slasher and he had some big plays for us.”

Nederland took the second half kickoff and marched 70 yards in nine plays with Krautz scoring on a ten-yard run that made the score 28-3.

On their next possession, another nine-play drive ended when Lebaron connected with Conner McCauley on a 10-yard scoring strike that increased the lead to 35-3.

The next time Nederland had the ball, it took only one play with Krautz racing through the Falcon defense untouched for a 51-yard touchdown.  The extra point was blocked and Big Ned had a 41-3 lead.

Nederland closed out the scoring in the fourth quarter when LeBaron passed for nine yards to Reid Garrett.

The Bulldogs marched downfield on their first possession on LeBaron’s arm and the running of Krautz.  A personal foul penalty put the Dawgs into Falcon territory, but the drive stalled and LeBaron was stopped on fourth down from the 4, and Clear Lake took over.

Early in the second quarter, Nederland marched deep into Falcon territory but the Falcon defense stiffened again and forced an incomplete pass on fourth and goal to thwart another drive.

Two plays later, Ty Sheppard stepped in front of a Will Smith pass and returned it 10 yards to the three.  Two plays later, Dean Fisher snared a tipped LeBaron pass in the end zone.  James Brindza added the PAT and Nederland led 7-0 with 9:49 remaining in the half.

On the Dawgs’ next possession, LeBaron was intercepted by Max Godwin, who returned the ball 9 yards to the Nederland 18-yard line.  But the Bulldog defense was stifling, forcing Clear Lake to settle for a 32-yard field goal by Scott Marshall, which trimmed the lead to 7-3.

Nguyen had a 51-yard run on Nederland’s next possession, and two plays later, LeBaron scampered 15 yards untouched to the end zone that increased the lead to 14-3.

Nederland had another possession, starting at their own 31.  LeBaron connected with Tavian Mayfield on a 31-yard completion to the Falcon 38. Two plays later, Krautz galloped 38 yards into the end zone with 2:28 left in the half and Nederland had a 21-3 advantage at the half.