Which history will repeat itself? ’81 win revered, but Cards have struggled vs. Big 12 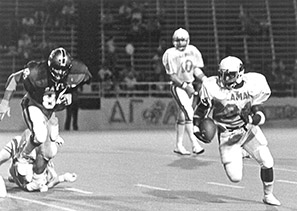 “The great thing about competitive sports and having people in the locker room is, they’re competitors,” the eighth-year Bears’ head coach said. “Competitors, they play. They perform. That’s their job, every time they step on the field. Our motivation is to win.”

That’s the point of view Ray Woodard shares with his Lamar Cardinals, except the sixth-year chief of that program has the bigger hill to climb in McLane Stadium tonight.

“I was just as guilty as our players. I did not go to a high school game Friday night. I was at home, watching the entire Baylor-SMU game,” Woodard said. “Probably shouldn’t have done that right before our home opener, but I did.”

He had every right to.

Lamar has not defeated a current Football Bowl Subdivision team in six tries since relaunching its football program in 2010. In its past two tries, Big 12 opponents have simply overwhelmed the Cardinals.

Now, the No. 4 Bears are in front of Woodard and friends. Tonight, they’ll be in front of some 45,000 and millions more watching on Fox Sports Net.

How much Woodard will enjoy the exposure remains to be seen, but he’ll take it.

When the Bears and Cardinals last met at would-be Baylor (later Floyd Casey) Stadium in 1981, Lamar rocked the nation, shocking the defending Southwest Conference champions 18-17. Many in Golden Triangle have had reason to reminisce on the big win all this week.

While the Cardinals folded their program and later reinstated it in the years since, the Bears have had their ups and downs. Woodard admires the work Briles has done in establishing Baylor as a national power.

Big 12 teams are known for talent and size, yet it’s the speed Woodard said has been the common denominator in the blowout losses to Oklahoma State and A&M.

“A lot of the speed has to do with angles, and what angles you take to block people,” he said. “The same thing with tackling people. The physicality of the [A&M] game didn’t impress me as the speed. We just had trouble running them down. That’s something you have to learn and you can’t wait until the game to do it. We have to do a better job of coaches addressing that.”

Lamar could get its fill tonight of chasing down what was the top offensive unit in the nation last year at 581.5 yards per game. As if that wasn’t good enough, Baylor hung up 723 total yards (300 yards) on SMU in a 56-21 victory eight days ago.

Seth Russell threw for 376 passing yards in his first start, but Briles was surprised his 15-for-30 clip wasn’t a higher completion rate.

“I’ll take production any day,” he said. “We percent everything, every day in practice. He had been in the 77 to 82 percent range during practice. He was really sharp, mentally.

“He’s got a fearless nature to him, but we’ll have to make sure it doesn’t step outside the box.”

Whatever the formula is for beating Baylor, Lamar running back Kade Harrington knows the approach is much simpler.

“We just have to go out and play, play our game, do what we know we can do,” he said.

Woodard will get to evaluate for a second straight in a real game his quarterback situation. Joe Minden earned the start last Saturday against Bacone College (Oklahoma) and played the first three series before Carson Earp entered. According to the latest depth chart, Earp will start against Baylor.

“Both our quarterbacks look relaxed,” Woodard said. “They looked like they knew where to throw the ball.”

Senior wideout Reggie Begelton said he didn’t notice a difference between Minden’s and Earp’s play. Minden credited the explosiveness his receivers and running back display to make his and Earp’s job easier.

Briles’ charge for his defense is to not let Lamar get into a rhythm. That seems like a given in a matchup of Big 12 vs. Southland, but the coach is leaving nothing to chance.

“That’s the biggest concern going into a game … letting a team have belief,” he said.