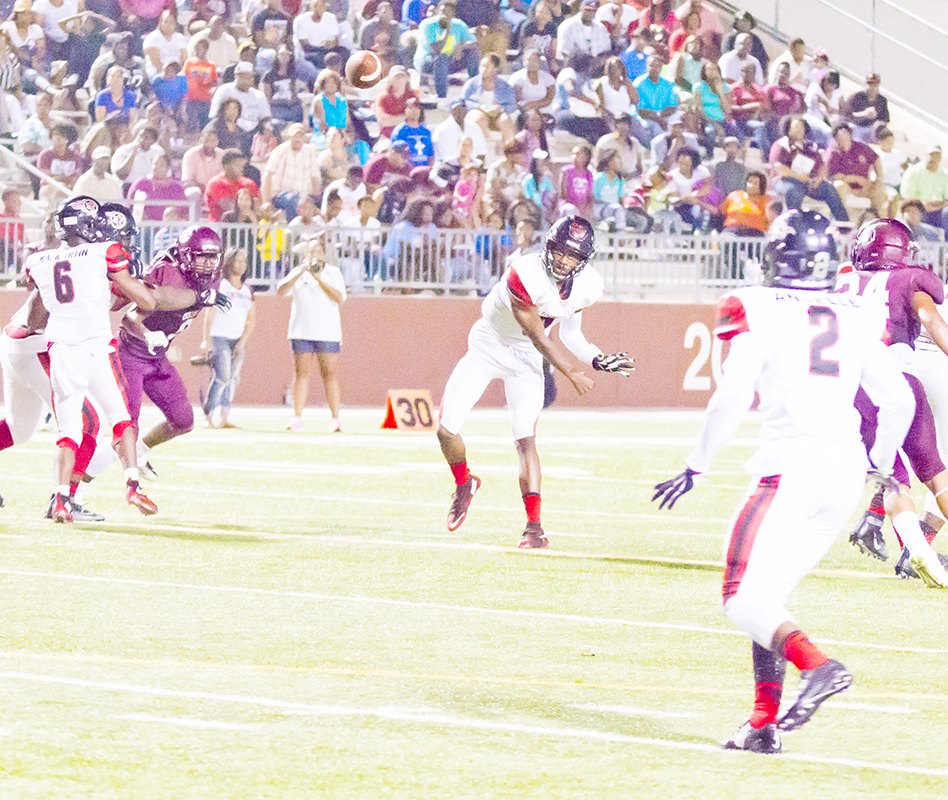 He gave this line to his players before the Titans faced the Beaumont Central Jaguars last Saturday.

“That has been missing,” Harrison said.

Gamble said he noticed the Panthers played loose and seemed to enjoy the game while the Titans were tight. Ozen defeated Memorial, 31-30.

“This past week we went out and had fun,” Harrison said. “We eliminated some of the unnecessary pressure on the kids. The players were able to go out and play a game. I told the kids when a play was made, to not get a penalty, but to celebrate and have a little excitement.

“It all started off with Kevin Williams deflecting a pass and (Kary) Vincent coming up with a pick,” Harrison said. “Then, Kadon (Harrison) hit Rickey Thomas for a big touchdown and all that added up to the excitement we had on the field.”

There was not much to celebrate for the Titans after last year’s loss to tonight’s opponent, Houston Lamar. The Texans walked out of Memorial Stadium with a 58-28 win and the game cost the Titans one of their best defensive players, C.J. Levine, who was injured and missed the rest of the season.

“We lost several kids during that game, one being Levine,” Harrison said. “We want to come out of this one healthy.”

Harrison pointed to former Texans quarterback J.W. Ketchum as the difference in last year’s game. Ketchum rushed for 117 yards on 13 carries with two touchdowns. Ketchum is now a freshman safety for the Baylor Bears.

“They don’t have a quarterback this year who is as athletic as J.W. Ketchum was last year,” Harrison said. “He took that team to a completely different level. This year’s quarterback (Owen Holt) is more of a pocket passer. He is not as big a threat to run but they have a huge offensive line that gives him time to throw. We have to get some pressure on him, so he doesn’t stand back there and pick us apart.”

Memorial this week hopes to get its offense on track with the Titans averaging 294.5 yards a game. The Titans have 280 yards rushing and 309 passing yards through two games.

Kameron Martin leads the Titans with 135 yards on 39 carries with no touchdowns.