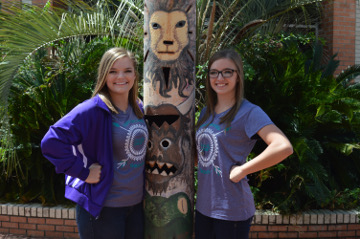 The term “sweet 16” refers to the larger than normal number of cheerleaders on the squad this year and according to cheerleader sponsor Traci Ewing, Thompson and Provost are great leaders.

“These two don’t focus on themselves, they focus on the team, and to me that’s a sign of a good leader,” Ewing said.

Ewing said this year’s group of cheerleaders is unique and by mid-week she’s usually in a panic mode — but not with this squad’s leaders.

“They don’t take the spotlight, they know to go in and get ready,” she said. “They are organized and very prepared.”

Thompson and Provost each came to be cheerleaders along a different path. Thompson started cheering at the age of three; Provost in her freshman year. But both have taken some sort of dance or tumble class.

Being part of a team that is highly visible and easily recognized means Thompson and Provost must shoulder a lot of responsibility, and that’s part of what led them to the squad. They agreed that they are grateful for the chance to lead the squad and work to make it the best it can be.

A lot of work and planning goes into the Friday night performance.

“On Sundays we get the music and choreography, on Mondays we paint the signs and the run-through sign for the players, Tuesday, Wednesday and Thursday is practice,” Provost said.

Thompson and Provost are both very involved with their school and community.

“I’m president of Indian Players (theater group), and a member of the French Club,” Thompson said. “Outside of school I just accepted a job at Carpenters Way Church in Groves and I work as a coach at Full X.”

Provost is vice president of the National Honor Society, a member of DECA and the Spanish Club and is enrolled in advance placement classes.

Outside of school Provost is an active member of St. Elizabeth Catholic Church CYO, dances at Taylor Dance Studio and tumbles at Full FX when she can.

Ewing keeps the cheerleaders busy even when football season is over.

“About three years ago we started working with the special needs students in Skills for Living class,” Ewing said. “They work with the students one-on-one playing games and doing activities and both Megan and Shelby are peer tutors as well.”

Working with Skills for Living students is something close to Thompson and Provost’s heart.

“We taught them how to dance for prom and we’re more like friends than teacher aides,” Provost said.

Thompson said the relationship between the cheerleaders and the special needs students has never felt forced and is something she looks forward to taking part in.

Provost and Thompson are enjoying the journey of high school and of leading the cheer team while looking toward the future after high school.

“I plan to sty local, to keep my job at Carpenter’s Way the rest of my life,” Thompson said. “I’m also considering teaching first grade math.”

Provost has applied to Texas A&M where she will major in psychology in preparation for a career as an occupational therapist and work with special needs children.