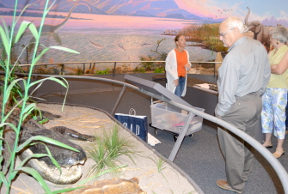 Stephanie Harran, left, instructs prospective docents Mickey Breaux, 69, of Port Arthur and Tana Hightower, 67, of Bridge City on the best way to provide educational tours of the Museum of the Gulf Coast.

How does one pique the interest of a room full of third graders, and keep them engaged throughout a museum tour?

Start with a 13-foot long alligator, of course. And, for good measure throw in a set of alligator teeth, a couple of skulls, and a few kitchen implements like a sponge, tea strainer and a spoon.

Six volunteers attending Tuesday’s docent training at Port Arthur’s Museum of the Gulf Coast learned those techniques and more during a training session designed to teach the ins and outs of becoming a museum guide.

Sarah E. Bellian, museum curator, said the training was the first-of-its kind at the museum, but one that was needed.

“The enthusiasm you get from a person passionate about history and the little vignettes they can share, certainly make it more interesting, Bellian said.

The museum provides tours for all ages, including every third grader in the Port Arthur Independent School District system.

The prospective docents were told to lead a tour of children by stopping at stations that are part of the Ragin Reptiles tour, including ones which educate the young museum visitors about wetlands, the alligator, Indians, a live animal show, and the Dunn Gallery. The exhibits are followed by a craft time.

Harren encouraged the group to tell stories, including the history of the American Alligator at the front of the museum.

When alive, the alligator weighed 1,000 pounds.

As the story goes, the musuem’s gator was killed in Anahuac, but not on the first attempt.

A hunter hired by the museum tried to shoot him once and somehow managed to drag the reptile into his boat. That was when the gator woke up and knocked the hunter out of his boat with his tail.

The following year the same hunter came back, and, and though not planned, shot the same alligator again, only realizing it when he saw his hunting tag in the gator’s tail.

During the wetlands exhibit, the novice docents learned they could use kitchen objects to demonstrate how the ecological habitat that is abundant in Southeast Texas works.

Also good to have on hand are a couple of reptile skulls, one belonging to an alligator and the other a crocodile.

“An alligator’s skull is square and a crocodile is v-shaped,” Harren said.

All stations dovetail with whatever exhibit is currently in the museum’s Dunn Gallery. In this case, it’s the reptile art of John Agnew.

Mickey Breaux, 69, attended the docent training for the first time Tuesday, though it was not his first time to tour the museum, or show it to others.

“I’ve been to this place 40 times and brought people from all over the nation,” Breaux said.

Now retired from the Steelworkers union, Breaux said becoming a docent would give him something to do in the afternoon, in a place he loved.

“Every time I come here I learn something new,” Breaux said.

In addition to the third graders, others tour the museum including students from schools all over the region, and adults.

Saying everything without a word

Artist leads children in ‘quiet advocacy’ at PA Library Not all ideas can be bound by rules and structure. Some... read more