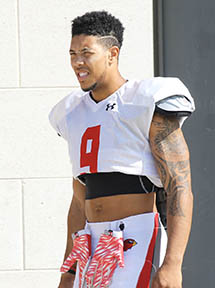 OFF (OR ON) THE CHARTS

A quick look at some of Reggie Begelton’s places in Lamar’s receiving record charts:

BEAUMONT — Come December, Reggie Begelton will walk across the Lamar graduation stage with a degree in engineering and, unless fate has other plans, the school record for career receiving yards.

That’s what other programs missed out on when Begelton finished high school at Beaumont West Brook.

This marks Begelton’s seventh semester at Lamar, and at least the third for which he’s been on scholarship.

His highest offer coming out of high school was a half-scholarship at Abilene Christian, then a Division II university. Missouri Valley College of the NAIA also offered Begelton but did not have the major he wanted.

So he stayed home in Beaumont and began studying chemical engineering. He found it hard to juggle that and football, so he switched to business — with a concentration in industrial engineering.

Arlington Nunn is only in his second year as Lamar’s receivers coach, but he could sense something in Begelton the first time he met him.

“Soon as he opens his mouth, it was obvious he’s pretty intelligent,” Nunn said. “He has a good physique and good size. He looks a lot bigger in pads.”

Begelton’s concentration on the football field has been on the passing game.

He caught a school-record 18 passes against Stephen F. Austin in 2013. His 18 catches that year set a school mark for most in a season. And he extended his LU career catches record to 174 with four against Bacone this past Saturday.

Nunn says his unit doesn’t talk about records. Begelton isn’t thinking about them, either.

“In order for me to get to this point, I had to work,” he said. “I can’t let that get to my head. I have to continue to work and just pretend that I’m not there yet and just keep working for us to win these games. I can’t get complacent.”

Begelton can reach his latest plateaus this Saturday against Baylor, but that might not come so easy.

It’s not just because Baylor (1-0) limited SMU to 166 yards through the air or picked off the Mustangs twice last Friday. It’s mainly because Lamar (1-0) has loaded up its receiving corps to give Carson Earp and Joe Minden plenty of options.

“It’s a good thing we have more people instead of just one person who can do it all,” Begelton said. “It’s a good thing that Handy is an athlete and we can depend on him to go to the outside and do what we need him to do. It gets the stress off of one person and the whole receiving corps can do that.”

The well- but soft-spoken Begelton characterizes himself as a quiet leader, but his smarts on and off the field has spoken volumes.

“He makes my life easier,” Nunn said. “He’s the type of guy, you tell him something one time and he’s got it. He doesn’t take a lot of reps.”