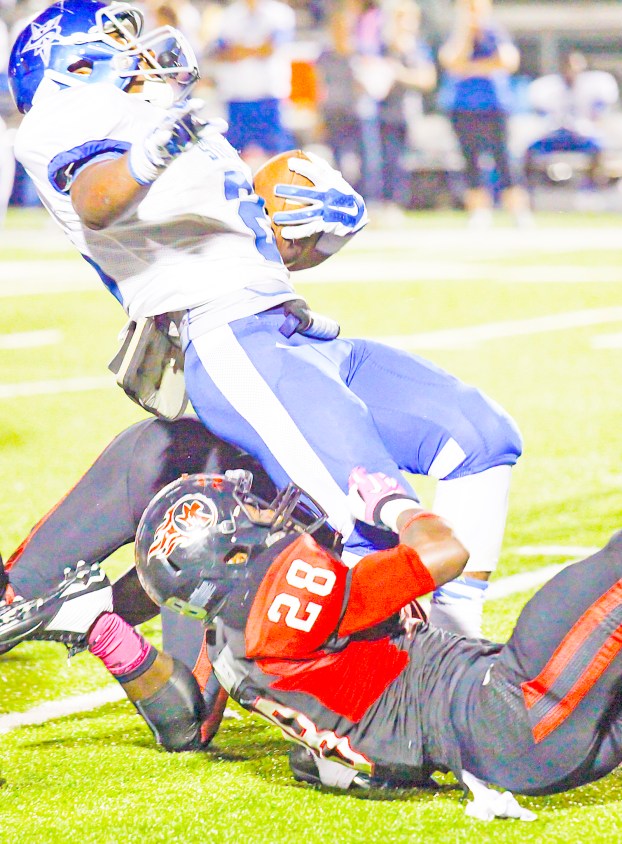 It has been quite a long time since the Port Arthur Memorial Titans could celebrate a great defensive showing after a game.
Jacorien Barnes celebrated Friday and now wants to make sure the party is not over.
Beaumont Central’s 235 yards of offense were the lowest marks a Titans defense has given up since Memorial’s seventh game last year when Baytown Sterling put up 228 yards.
Barnes had one of the best single defensive games for the Titans in well over a year. He collected 10 tackles, 2.5 for a loss and returned an interception 34 yards for a touchdown.
Barnes’ first career touchdown came in the second quarter with the Titans nursing a 14-7 lead.
“That score came at a crucial time in the game,” Memorial coach Kenny Harrison said.
Barnes, the brother of Texas Tech sophomore defensive back Jalen Barnes, said the Titans defense pushed itself to take pride in their work this week.
“Last week felt wonderful,” Barnes said of the Titans’ 24-7 win over the Jaguars. “Now I have to keep working and keep playing to have an even better game this week. We all worked hard. The defense went out and tried to lead the team this past week.
“The defense was a setback last year. This year we have new players and playing with more heart.”
Barnes’ interception was one of five first-half turnovers forced by the Titans.
“When the ball was in the air I told myself, ‘Catch it. Catch it. Catch it,’” Barnes said. “When I caught it, I thought of ‘touchdown’ and I took off running.”
It was the first career touchdown for Barnes, who started last year as a sophomore.
“It felt great,” Barnes said. “Now, I want another one.”
Harrison said: “Jacorien had a great week. He is a captain on defense and he worked extremely hard last week.”
The bloodline to be a great defensive player is in the Barnes family. Jalen Barnes had 17 tackles a year ago and played in 10 games at Texas Tech.
“Jacorien has done a tremendous job as a returning starter after playing as a young kid,” Harrison said. “He has been around the program a long time after watching his brother play for us. His parents (Solomon and Andetria Jones) are very supportive of the program and I was really excited to see him step up last week.”
Saturday was not the first time this year Barnes had an interception returned for a touchdown. It was just the first time one counted for an official score.
“He had a pick-six during two-a-days in our final scrimmage,” Harrison said. “Kadon (Harrison) threw him a pick-six, and I thought at the time Kadon threw it to him because they are really good friends. It is good to see him get a pick-six against someone else.”