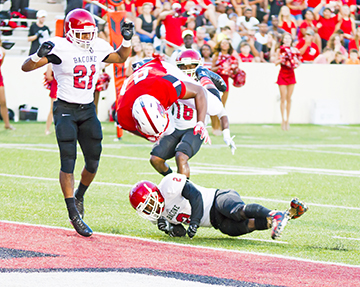 BEAUMONT — Two plays from scrimmage into the game, Joe Minden led the Lamar offense onto the field. And he immediately went to work.
Carson Earp debuted on Lamar’s fourth offensive series. Like Minden, he threw for two first-half touchdowns.
Now that Lamar’s 66-3 victory over Bacone College on Saturday night is in the books, coach Ray Woodard has a record of theirs and Brett Cox’s in-game experience
— even if it was only 50 minutes’ worth. Both coaches agreed to 10-minute periods for the second half.
“That looked like a first game,” Woodard said. “We struggled through some things. It wasn’t as sharp as we liked right off the bat, but I thought Bacone was playing hard.
That had a little bit to do with that. I like the way we kept working and working, and we got what we needed out of the night. It’s always good to start 1-0, and I’m very proud of that.”
Saturday was the Lamar debut for transfers Minden and Earp, who joined the program during the spring semester. Cox is a true freshman from Sachse.
Blake McKenzie, who worked out as the third-string QB, is out indefinitely with an injured knee. Woodard, who indicated the extent of the non-contact injury is to be determined, said the junior college transfer would have probably seen the snaps Cox eventually took Saturday.
Neither Minden nor Earp really gained an advantage over the other just yet,
Woodard said. But Minden, a senior who last played at Stephen F. Austin, received the starting nod based on his Southland Conference experience. Earp spent the past two years at Navarro Junior College.
“We’re just approaching it one day at a time, just trying to be as competitive as can be, trying to be the best players we can be for the team,” said Minden, who had 170 yards on 16-of-20 passing. “We’re buddies, we’re helping each other out, and the goal is Lamar winning.”
Earp completed 5 of 6 passes for 91 yards and two TDs.
Now, the Cardinals can talk about Baylor, not that they hadn’t already by Woodard’s admission. The fourth-ranked Bears, who dismantled SMU 56-21 on Friday, will host the Cards next Saturday in Waco.
Talk about the Bears apparently didn’t get too much in the way of the Cardinals’ preparation for NAIA Bacone, of Muskogee, Oklahoma.
“I think the hardest thing for us, preparation-wise, was having no film [on Bacone],” running back Kade Harrington said. “They brought in new coordinators, and we just had no film. We just had to continue to execute on our own personal stuff and make sure everything was right. I thought we did a really good job of that the whole week leading up to the game.”
Minden led Lamar to touchdowns on its first two series. The first drive, just 15 yards in three plays, was set up by a fumble recovered by Manasseh Miles.
Minden threw an incompletion on his first attempt but connected with Michael
Handy, who spent much of last season as a running back, from nine yards out for the first score.
Lamar made it 14-0 shortly after Ronnie Jones recovered a Bacone fumble deep in the Warriors’ territory. Minden fired to junior transfer DeAndre Jennings for a 12-yard TD, as the tight end somersaulted over a defender into the end zone.
Earp showed off his rushing ability on his first drive with a 7-yard dash for a first down. Minden then took over on the drive, which ended with a 38-yard Alex Ball field goal.
From there, the Cardinals just piled it on.
Harrington dashed 5 yards for his first score after Earp threaded a 34-yard completion to Michael Handy in tight double coverage. Earp’s first TD went for 20 yards to redshirt freshman Martell Hawthorne.
True freshman running back Keegan Mitchell and Reggie Begelton got into the scoring act before halftime, and Lamar had a 45-0 lead.
In the abbreviated second half, Gee Gladney weaved through Bacone’s defense for a
36-yard TD play from Minden. Emmitt Raleigh, a junior transfer on Lamar’s third string, snuck in for his score, part of a team-high 66 yards on nine carries. And true freshman Emmanuel Atoyebi carried 22 yards for the proverbial cherry on top.
Special teams issue
The blowout victory against the NAIA program from Muskogee, Oklahoma, was expected for the Cardinals. But their special teams play left Woodard concerned.
“We’re going to have to work long and hard on catching the football,” Woodard said.
“Penalties on special teams in close games will kill you. … You should do your most improving between game one and game two, and obviously if we want to have an opportunity this next week, we’re going to have to improve a lot.”
Lamar muffed three returns on special teams, including one Port Neches-Groves alumnus Jayce Nelson lost early in the game. Two punt returns, a 63-yarder by
Nelson and 65-yarder by Seth Ellis, went for touchdowns, but both were called back for penalties.
Nelson redeemed himself, however, with 85 yards on five punt returns. He also had a reception for 12 yards.
Next for the Cardinals
Lamar and Baylor will square off at 6:30 p.m. next Saturday at McLane Stadium in
Waco. Fox Sports Net will carry the game.
Sam Houston State, hosts Lamar on Sept. 19 in Huntsville.

Next Sunday is a big day in Houston if you are a fan of the Port Arthur Memorial Titans. Jamaal... read more