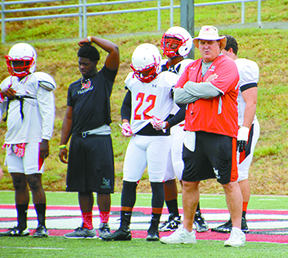 BEAUMONT — Lamar coach Ray Woodard took one look at the depth chart he released, and even he saw something unexpected.
Eight freshmen dot the chart, although none are listed as starters.
“I wasn’t expecting this many freshmen to play,” Woodard said. “I touted them as being a talented class, but I did not think when I put this down, you’d see that many guys in the two-deep. I was planning on redshirting more of these guys, but they just made the push.”
While this may not be the central theme in the Cardinals’ season opener Saturday against Bacone College of Oklahoma, it’s certainly a point of interest just for the sixth-year head coach, who’s mixing youth with plenty of seasoned talent from last season’s 8-4 team that could have earned an NCAA playoff berth.
“They’ve just made a push,” Woodard said of the first-year players.
Now, for the question everyone wants answered: Who is starting at quarterback for Lamar?
Apparently no one will know until the 7 p.m. kickoff, but the leading candidates since camp have been Carson Earp and Joe Minden.
Woodard warned in his weekly press conference Monday the public may have to wait until the game, but he said both quarterbacks would know beforehand who’s first. Both are expected to play, with sophomore transfer Blake McKenzie likely beginning a redshirt season.
“We just don’t feel comfortable going with one guy until we’ve seen them in games.,” Woodard said. “… I really feel like we need to see them play.”
Woodard will have two games to evaluate in-game play of his junior quarterbacks, both of whom transferred to Lamar for the spring semester. But in the short time Minden and Earp have been on campus, one has yet to clearly outplay the other.
“Spring ball, you’ve got three days in shorts and a spring game, so you’ve really got 10 or 11 practices,” Woodard said. “In the camp, we split down the middle, and I’m telling you — a lot of you people have been out there — one guy does something good and another guy does something good, and no one has taken over from the other. If they had, I’d have named a starter and make all these press conferences a lot easier.”
While Woodard has kept the actual starter under wraps, Bacone will reveal its offensive and defensive schemes for the first time under new head coach Lawrence Livingston. Among his many stops, Livingston was assistant head and offensive line coach at Texas-El Paso from 2004-08 and running backs coach at Texas A&M from 1998-2000.
Woodard acknowledged the Cardinals will have to make adjustments on the fly against a new staff, similar to last year’s opener against Grambling State when Broderick Fobbs took the reins for the Tigers.
“We’ll have to do a great job as players and coaches as far as adjusting.”
The Cardinals’ next two games are at Baylor and at Sam Houston State, yet talk about the latter, scheduled for Sept. 19, among the players has popped up after last Saturday’s Montana-North Dakota State game, Woodard said. The SHSU game is the Southland Conference opener and will carry early NCAA playoff implications for Lamar.
“I guess that’s human nature,” Woodard said. “We’ve had talk about Baylor, but we’ve had talk about Bacone. It’s hard to look past the season opener. I don’t think we will. We know what’s coming, but we’re very excited about getting to play a game. We’re tired of playing against each other.”

Sound bytes
• Lamar coach Ray Woodard: “It’s kind of a pride thing to know that we’re to that point that we’ve gotten there as a program to replace players who’ve been here all the way through. It kind of makes you stop and realize where you are as a program.” — On coaching after his first full recruiting class has exhausted eligibility