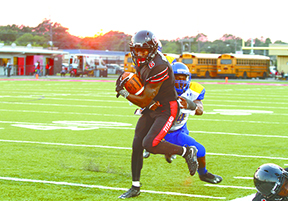 Blue-chip battle: Martin, Whaley to go at it at The Butch

One is committed to Baylor. The other still has at least 20 college offers out in front of him.
Tonight’s matchup between the Port Arthur Memorial Titans and the Beaumont Central Jaguars features two of the nation’s top recruited running backs.
Memorial’s Kameron Martin recently made his commitment to Baylor very strong with a tattoo of ‘BU’ on his arm.
Central’s Devwah Whaley has offers from a long list of schools including Baylor, Alabama, Texas, Georgia, Oklahoma and TCU to name a few.
“Devwah is one of the best backs in the state,” Memorial coach Kenny Harrison said. “He is a big kid with great vision. Facing him is going to be a great challenge for our defense. Kids always want to see where they stand against guys with such great athleticism. Definitely this weekend though, I am a fan of the [Baylor] Bears.”
Whaley ran for 45 yards on 18 carries with a touchdown in last week’s 27-24 loss to Beaumont West Brook. He also caught two passes for 40 yards with a touchdown.
Martin, meanwhile, did not cross the end zone and led the Titans with 74 rushing yards on 15 carries in a surprising 31-30 loss to Beaumont Ozen.
It was the first loss to the Panthers in the Titans’ history.
“In my two years playing against Memorial as coach of Central, the margin of victory has been one point and three points,” Jaguars coach Toby Foreman said. “I expect this one to come down to the wire just like the others.”
Central defeated Memorial 24-23 two years ago and the Titans took down the Jaguars 17-14 last year.
“Our kids always play each other hard,” Harrison said. “I don’t look for anything less this year. It is going to be a hard-fought game and it will prepare us for district play.”
Memorial wants this week to establish a stronger running game than it saw against Ozen.
The Titans did rush for 167 yards, yet neither Martin nor Marcus Younger went over 100 yards for the game. Younger had 59 yards on seven carries.
A lot of that had to do with the play of junior quarterback Kadon Harrison and receiver De’Andre Angelle. Harrison had 175 yards on 12-of-19 passing with three touchdowns. All three scores went to Angelle who hauled in nine catches for 150 yards.
“Memorial is going to come into the game in a bad mood,” Foreman said. “They don’t want to go 0-2 and neither do we.”

Sound bytes
• Memorial coach Kenny Harrison: “Central is always an athletic team. We are both going to be fired up come Saturday. The Jaguars play hard on both sides of the ball and that is really the biggest compliment to a program. It seems like over the last several years everyone plays its best game against us. If we want to be one of the top teams in the state, we have to come in ready to play week in, week out. Going into every game we want to be balanced on offense. Kadon and Angelle had the opportunity to hit a couple of plays and that took away from having long drives. Our strength is our running game with Kameron Martin and Marcus Younger. Our main focus is always going to be having a balanced attack.”
• Central coach Toby Foreman: “Dadrin Hopkins’ season ended last year against Port Arthur Memorial. He tore his ACL and I know he is looking forward to playing in this game. He made a few mental mistakes last week in his first start as quarterback, so we hope those go away this week. The ceiling for this team is very high considering how many young guys we have on the field. The effort they have shown has been the best effort I have seen since I became coach. Kameron and Angelle really give Kadon Harrison some nice weapons. The Titans defensive line is their strength in my opinion. If we don’t protect our quarterback and the runners, those guys they have up front could end up looking really impressive.”

BEAUMONT — Lamar coach Ray Woodard took one look at the depth chart he released, and even he saw something... read more