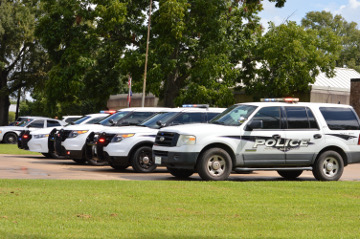 At 11 a.m. Friday— the exact time of the start of the funeral for murdered Harris County Deputy Darren Goforth in Houston, law enforcement across the state activated their vehicles’ emergency lights in a show of solidarity and grief.

Locally, Port Neches, Nederland and Groves police officers lined up in front of their respective stations, lights flashing, for one minute as requested by Texas Gov. Greg Abbott.

But the display meant more than obeying the governor’s request.

After the lights were turned off and officers went back to their regular duty Port Neches Police Chief Paul Lemoine spoke about the ‘thin blue line.’ The phrase is represented by a black background and a horizontal blue line. The blue line represents police with one portion of black representing good citizens and the other, criminals.

“It’s a somber mood today for law enforcement,” Lemoine said, adding that some were not able to attend the funeral but were able to watch the live feed on TV.

Inside the station were a number of paper police badges with written sentiments of thanks to the officers for their work.

“They might not think it’s a lot but they took the time to sign the paper and send it in,” he said, adding it means a lot to know the public supports law enforcement. 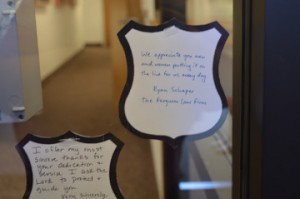 The Bayou Grille at The Medical Center of Southeast Texas also offered a free lunch to any officer who shows up in uniform or with official police identification.

News reports show the funeral was the largest for a fallen officer in Houston’s history with about 11,000 people in attendance and some law enforcement came from as far as New York and California.

The showing of support included a statement from President Barack Obama.

Obama reportedly called Kathleen Goforth, the widow of the fallen deputy, who offered his condolences on behalf of the American people.

“Targeting police officers is completely unacceptable – an affront to civilized society, Obama said in his statement. “As I said in my State of the Union Address, we’ve got to be able to put ourselves in the shoes of the wife who won’t rest until the police officer she married walks through the door at the end of his shift. That comfort has been taken from Mrs. Goforth. So we must offer her our comfort – and continue to stand up for the safety of police officers wherever they serve.”

The funeral concluded with a 21-gun salute and a helicopter flyover.

Deputy Goforth was gunned down while pumping gas into his patrol car on Aug. 28. He suffered 15 gunshot wounds. The suspect, Shanon Miles, has been charged with the crime.

Langham Class of ’57 celebrates long ago first day of school

NEDERLAND  — The year was 1945, the Japanese had just two days earlier surrendered and The Port Arthur News ran... read more