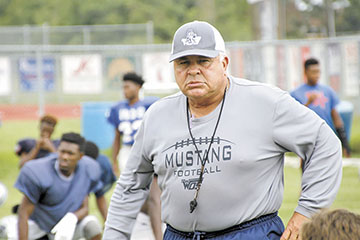 WEST ORANGE — West Orange-Stark gave up a pair of big plays last Friday against Little Cypress-Mauriceville that left coach Cornel Thompson with a disturbing feeling.
But WO-S’s defense also gave up only 186 yards and 13 points in a 13-point victory. The statistic, in itself, proved a big win for a unit Thompson says is rebuilding from last season’s run to the 4A Division II state final against Gilmer.
“We’ve got four starters back with a little bit of experience,” Thompson said. “We have two safeties that are missing from last year.”
One of them, Deionte Thompson, is a four-star athlete now at Alabama. The other, Trey Spencer, competes at Louisiana Tech.
“You’re not going to replace that type of caliber [of] players,” Thompson said. Wednesday. “But these kids, all we ask them is to play hard.”
Thompson’s youthful Mustangs defense — which starts only three seniors — will be in for a big challenge Friday at Port Neches-Groves, a team WO-S has had much success against over the years with an 18-7 series advantage. WO-S won last year’s meeting 33-27 in overtime.
“This is a big-play, quick-strike team that I’m worried about as far as this week,” Thompson said.
The Mustangs rely on Aric Cormier and Ryan Heissar in the secondary and Steven Tims at linebacker for leadership on defense. Heissar’s brother-in-law, Earl Thomas, is an All-Pro safety for the Seattle Seahawks and a WO-S alumnus.
But Thompson knows the unit will have its hands full with the multi-faceted PN-G offense led by senior quarterback Adam Morse, adding there’s no way to stop the Lamar commit. Morse tossed for 306 yards and five touchdowns in a 52-0 win at Clear Lake last Saturday.
“What you have to do is make them one-dimensional,” Thompson said. “You’ve got to stop the run. He’s got a great touch on the ball, and I don’t think you can let him get straight-legged back there.”
Thompson added holding any team to fewer than 200 yards and 13 points in a season debut is an accomplishment.
“This day and time, most teams, although [LC-M] is a Wing-T team, spread the field to where you not only have to defend [against] the formation, you have to defend the field. That’s a hard chore right there.”
The Indians have plenty more big-play threats, among them receivers Jack Giblin, Keynel McZeal and running back Kody Cropper.
“You’ve got to take advantage of your opportunities when you get an opportunity against them,” Thompson said. “But I don’t think you’re going to stop them. Those sons of guns are pretty dang good at what they do.”