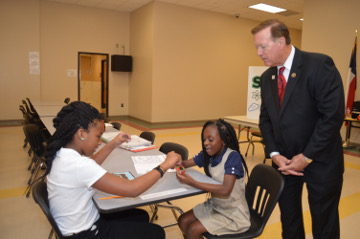 U.S. Rep. Randy Weber watches as Daiven Miller, left, and Skylar Francois work together to strategically “Save Fred,” during the YMCA’s After School Care and Literacy Program at Lucian Adams Elementary on Tuesday. Mary Meaux/The News

U.S. Rep. Randy Weber made some stops in southeast Texas and got a chance to see a group of elementary school students use their brains to solve a problem, see construction at Huntsman Port Neches new ethylene oxide unit and witness a large donation to a local university on Tuesday.

The congressman strolled into the cafeteria at Lucian Adam Elementary School just as Brittany Mercer, child care coordinator for the YMCA of Southeast Texas Port Arthur Branch, was giving instructions to a group of students. 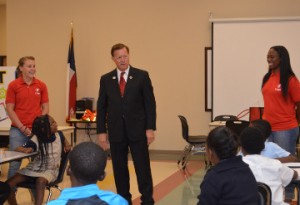 The students weren’t on site just for the healthy snacks and to get a jump on homework, they were brushing up on the skills in science, technology, engineering and mathematics, or STEM.

Their task was to “Save Fred.” Fred, a Gummy worm, sat atop a clear plastic cup representing a boat. Underneath was a Gummy Lifesavers candy representing a life preserver. The students, armed with two paper clips each, were in teams of two and had to partner with each other to get Fred into the life preserver.

Weber circled the teams eying their work and asking questions before joining Mercer, YMCA President William “Bud” Oliver, and other representatives of the Y at the front of the class.

“This is great, “ Weber said of the After School Care and Literacy Program at the school. Weber’s wife was an elementary school teacher, he added, and he ‘lived and breathed education.’

Earlier in the day Weber toured Huntsman Port Neches Operations’ new ethylene oxide unit that, when completed in the fourth quarter this year, will make the facility the largest single-site producer of EO in the U.S. 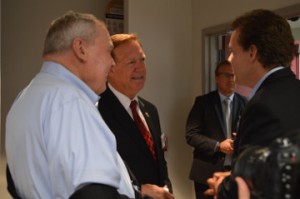 Earlier this year Huntsman’s manufacturing site in Port Neches moved from a divisional site to a corporate operation facility.

Also on hand was the founder of Huntsman, Jon Huntsman Sr., and his son and Chief Executive Officer Peter Huntsman.

The elder Huntsman gave kudos to Lamar University for their training programs thus tying in to the fourth $1 million donation from the Huntsman’s to LU. 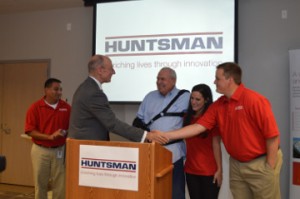 The donation is earmarked for the Wayne A. Reaud Building on the LU campus. The building will be part of the new entrance to the campus on the corner of Jim Gilligan Way and Rolfe Christopher Wolfe Drive.