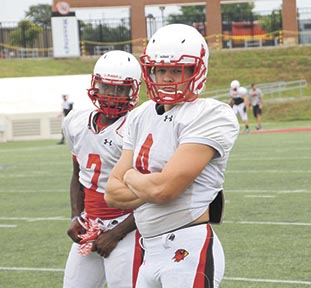 BEAUMONT — Jayce Nelson tried his best to will Lamar to a crucial Southland Conference victory in Conway, Arkansas, last November.

His 5-yard pass from Caleb Berry tied the game at 41 with 40 seconds left in regulation. It was the second touchdown of the night for the Port Neches-Groves alumnus, who finished with 89 yards on eight receptions.

“He went 8 for 89?” Lamar wide receivers coach Arlington Nunn responded Tuesday, almost 10 months later. “I didn’t know he did. … But that doesn’t surprise me with Jayce doing that. He’s just a good football player.”

Nelson’s career game — along with Reggie Begelton’s ascension to the top of Lamar’s all-time receptions chart — made for a special night for the Cardinals … that Central Arkansas spoiled with an overtime field goal for the win. It was the only loss in the Cards’ last five games that season, but a win there could have given them sole possession of third place and possibly the third berth from the Southland into the NCAA Division I playoffs instead of Stephen F. Austin, which like Lamar and UCA were 5-3 in league play.

Still, Nelson stepped up his game.

“I wouldn’t say it was a breakout game,” he said. “I guess it was more of a confidence booster more than

anything. I’ve never caught that many balls before.”

Yet, Nelson became more of a contributor to a

high-octane offense led in part by All-Southland performers Mark Roberts and Reggie Begelton. It only seemed academic that Nelson would come out of the following spring camp listed as a starter.

That’s not the case going into opening week. Nelson has been moved from X receiver on the first string to the Z on the second behind fellow senior Devonn Brown on Lamar’s latest depth chart.

“It doesn’t bother me at all,” Nelson said. “I think that I’m going to come in and play. That’s what I’ve been told, so it doesn’t matter if I’m the first person out there or not. I want to contribute the best way I can.”

Maybe the biggest development within the wide receiver corps has been the return of junior Michael Handy to the X position. Handy spent most of last season as a running back while still going for 151 yards on 12 carries.

Brown, for his part, had a strong preseason camp at the Z, beating out Nelson for the starting role at that position.

It doesn’t mean Nelson can’t be the difference maker many would’ve expected just a month ago.

“Jayce could definitely be a starter for us,” Nunn said. “He’s going to fit everywhere. He’ll be on the field. You won’t be able to tell the difference between him and the starter out there. Jayce is a great player, a great guy. When he gets in the game, he’ll make plays.”

Just like he has much of his collegiate career, which has seen no redshirts.

“I’d say I’m pretty lucky,” Nelson said. “Not many people make it all four years and play their first year. Even though I didn’t do too much my first year, I think I progressed a lot since then and helped the team do even more this past season. I think I will help the team this year.”