DD6 channel complete to much fanfare 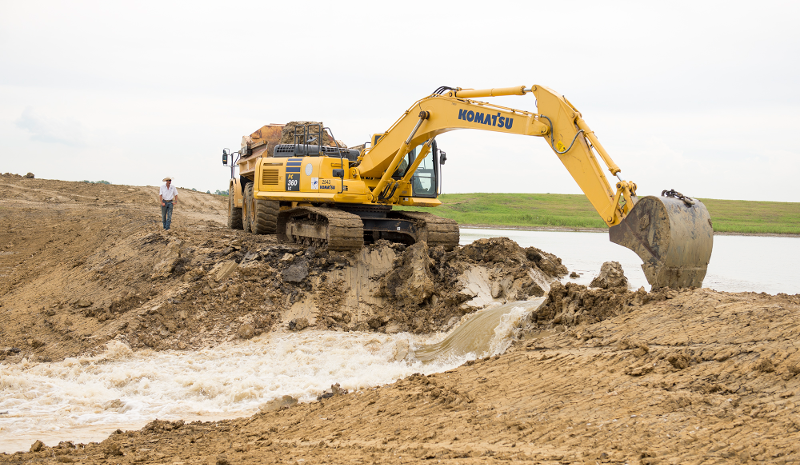 During a special ceremony Monday a bulldozer moved earth to allow the first waters to flow in the new Needmore Diversion Channel.

Under the cover of a hazy later summer sky, fireworks exploded Monday morning while muddy waters spilled across the Needmore Diversion Channel, signaling the completion of a project 80 years in the making.

Designed to deliver flood flows from Taylor’s Bayou while providing flood relief to the area, the Channel is a major component of the drainage master plan for the 180,000-acre upper Taylor’s Bayou Watershed.

“This has been our vision for over 20 years,” Josh Allen, president of the DD6 board, said Monday prior to a ribbon cutting ceremony.

Allen said the project was first proposed in 1934, and had taken 16 years to obtain a permit.

“It is an exciting day,” Dade Phelan, District 21 State Representative, said. “I don’t think you can understand the enormity of this project until you come out here.”

Completion of the project would take 51,000 acres out of the flood plain, and allow development in areas that beforehand were too prone to flood.

The channel will eliminate millions of dollars of damage to homes, crops, pastures, and 106 miles of county roads and bridges in the 180,000-acre watershed.

Development did not happen overnight. Rather, from start to finish, the project was decades in the making.

During the celebratory event, those who contributed to the project’s completion were recognized, mainly the DD6 employees who were lauded for working tirelessly in the cold of winter and heat of summer.

The project also would not happened without the commitment of Sam O. Smith, who was president of the board for about three decades, LeBlanc said.

A need for flood relief was demanded after a countywide flood in 1979 or 1980, LeBlanc said.

After the project was shelved because of environmental concerns, another plan had to be developed.

Immediately after a Corps of Engineers wetlands permit was issued, 1,400 acres of right of way were surveyed, and property acquisitions were accomplished in 2008.

The project suffered a setback in 2008 when Hurricane Ike floodwaters, reaching 22 feet above mean sea level at the mouth of the channel, inundated draglines used on the project with saltwater. The equipment had to be disassembled, hauled to Louisiana and Alabama and completely reworked.

The draglines were delivered back to the Needmore project on March 29, 2009 by barge via the Intracoastal Canal, kicking off the project anew.

The Need more Diversion Channel averages 14 feet in depth; has a 186-fot wide bottom with 4:1 side slopes, and a average top width of 340 feet.

Excavation of the channel involved 9.6 million cubic yards of dirt.

Other components of the master plan include: the Mayhaw Diversion Channel, channel and crossing improvements on the North Ford of Taylor’s Bayou, the Green Pond Detention Facility and channel improvements to Green Pond Gully.