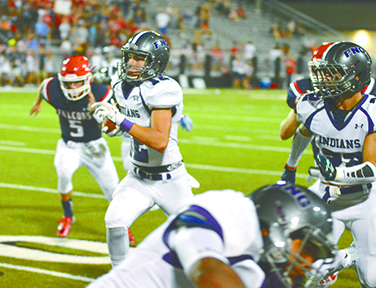 “Really thrilled with the result,” said PN-G coach Brandon Faircloth. “There were also some first-game mistakes. Definitely too many penalties and a lot of things we can get better at. The great thing is when there is a great result, there is also a long way to go. We just have to continue to go out and have great practices.”

Morse, a senior quarterback, completed 23 of 37 passes for 306 yards. Senior Jack Giblin, who had his junior season cut short by injury, showed no ill effects in his first game back. He caught a team-high nine passes for 104 yards and a touchdown.

“He played really well. They [Clear Lake] have a good defensive line and they got to us a few times, but Adam is a great player and did a good job of finding the open receivers.”

Senior running back Cody Cropper turned in a big night, both running and catching the ball. He led all rushers with 76 yards on 13 carries, including a 20-yard TD run. He also caught five passes for 89 yards a pair of scores.

Already leading 35-0, the Indians took until the closing minute of the third quarter to find the end zone again. Morse hit Caisen Sullivan on a 26-yard scoring pass with 16 seconds remaining in the quarter to extend the lead to 42-0.

After the ensuing kickoff, Smith was intercepted by Nathan Vidrine, who returned it 40 yards for a touchdown on the final play of the quarter to push PN-G’s lead to 49-0.

The Indians closed out the scoring on Gunnar Nicholson’s 23-yard field goal with 1:07 remaining in the game. That drive featured a steady diet of junior running back Chase Gordon, who carried the ball 15 times for 67 yards.

“Any time you have a shutout, there was a great defensive effort, so I’m proud of those guys,” Faircloth said of his defensive unit. “We’ve got something good to build on and will continue to improve. I thought we did a good job of stopping the run, which forced them into some passing situations and we were able to capitalize with those three interceptions.

“In high school football, you coach what you have and this year we had more good defensive lineman than linebackers, so we switched to a 4-3 alignment up front.  Next year it may be different, but that is why we switched.”

The Indians defense forced a quick three-and-out on Clear Lake’s opening possession of the game and the PN-G offense wasted little time in getting the scoring started. On its first possession, Morse hit Giblin on a 20-yard scoring strike to put the Indians up 7-0. The drive was kept alive when Morse and Giblin connected for six yards on fourth-and-four.

PN-G struck again on its next possession to take a 14-0 lead. Morse and Keynel McZeal hooked up on a 24-yard scoring play to cap a 7-play, 53-yard scoring drive. McZeal finished the game with six receptions for 69 yards.

Morse capped the Indians fourth drive of the game with a 30-yard scoring strike to Cropper, his third TD pass of the first half, which put the Indians up 21-0 with 9:13 remaining in the second quarter.

Cropper scored PN-G’s first rushing touchdown of the game on the Indians’ next possession. He capped a six-play, 60-yard scoring drive with a 20-yard TD scamper, starting up the middle and then bouncing it outside to make the score 28-0.

PN-G’s defense was more than up to the task in the first half, completely dominating the Falcons offense. Senior linebacker Anthony Anniboli picked off a pair of Smith passes, the second of which set up the Indians final scoring drive of the first half.

After an incompletion, Morse hit Cropper for a 36-yard scoring strike with 59 seconds left in the second quarter on the same wheel route play the two connected on earlier in the half to give the Indians a 35-0 halftime lead.

Also for the Indians, Jace Runnels had 22 yards on six carries and Sullivan finished with 42 yards on two carries. Cody Turner netted 34 yards on 16 carries to lead Clear Lake.