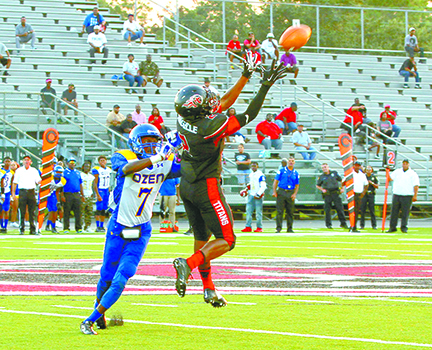 De’Andre Angelle of Memorial hauls in a long pass against Deonte Darjean of Ozen on Friday night at Memorial Stadium. (Morgan Jones/Special to The News)

De’Andre Angelle was 1 minute, 51 seconds away from becoming the Week 1 hero on his own turf.
Then came Josh Boyd.
The senior quarterback, who totaled nearly 1,500 total offensive yards a season ago, led Beaumont Ozen 71 yards down the field and stretched his arm into the end zone on a 3-yard quarterback keeper with 9 seconds left. Diundre Washington kicked the winning extra point, and 5A Ozen shocked 6A Port Arthur Memorial 31-30 Friday night in Memorial Stadium.
For Ozen (1-0), it was a history-making upset. The Panthers defeated the Titans for the first time in 10 tries.
“This is just a carryover from how we were starting to get better and improving and understanding the system,” Ozen coach David Suggs said, his team winning four of its last six regular season games in 2014. “This is a good start for 2015.”
Boyd finished with 158 yards on 15-of-23 passing, completing three passes for 35 yards and engineering two third-down conversions on the winning drive. His 14-yard strike to Jaydon Cunigan was followed by Calvin Tyler’s 16-yard run to the 3 with 20 seconds remaining before Ozen called its first timeout of the half.
Tyler, who finished with 141 yards on 23 carries, was stopped for no gain on the next carry, prompting the second timeout. Then, Boyd, who ran 12 times for 21 yards, found a hole to his left and stretched out his arm on contact with two defenders to get the tying score.
Now, flash back almost two game minutes earlier.
Angelle, who caught nine passes for 150 yards and three touchdowns, turned a fourth-and-3 pass into a go-ahead score from 45 yards out, shaking off two defenders down the home-team sideline in the process. It ended a six-play, 53-yard drive that was a response to Tyler’s 5-yard TD score to give Ozen a 24-23 lead.
Memorial’s lead — and unbeaten record against Ozen — could only hang on for so long, though.
“Of course, it’s not a good feeling,” Titans coach Kenny Harrison said. “It’s just not a good feeling right now. The kids worked hard, did everything we asked them to do. We’ve just got to go back and work our butts off. The entire team — the players, the coaching staff — we’ve just got to go back and work hard.”
Ozen set the tone for an upset four snaps into the game, when linebacker Markel Perry picked off Kadon Harrison and went 31 yards untouched into the end zone for the early lead. That score alone ended a 70-0 scoring streak for Memorial against Ozen the previous two years.
It took a little while for Memorial to respond, too.
Both teams came up empty on each of their next three drives, with Memorial failing to convert two fourth downs. On the Titans’ last series of the first quarter, back-to-back passes were dropped in the end zone.
Memorial escaped danger after Washington attempted a 22-yard field goal way short and capitalized with an eight-play, 80-yard drive. Marcus Younger’s 29-yard rush around the right end at the 6:42 mark before halftime tied the game at 7.
But Boyd, Ozen’s outstanding run-and-pass threat, led the Panthers 83 yards in 17 plays to melt off all but two seconds of the remaining time. He found Chas Butler wide open in the end zone, and a run out of Swinging Gates formation gave the Panthers a stunning 15-7 halftime lead.
They threatened to add onto the lead to start the second half, but a first-down completion on a fake punt was erased by a penalty for an ineligible receiver. The next play, Boyd’s low punt bounced off a Memorial defender and rolled out of bounds at the Ozen 6.
Three plays later, Angelle had a 7-yard TD catch on a fade rout to pull Memorial within 15-14.
Angelle came up big again. Shortly after Memorial pulled within 18-16 on a safety, Angelle had a 6-yard scoring catch at the 10:09 mark of the final quarter to give Memorial its first lead at 23-18. Ozen then marched 57 yards in 15 plays and 5 minutes, 42 seconds, to reclaim the lead.
Kameron Martin had 74 yards on 15 carries and Younger totaled 59 yards on seven rushes to lead Memorial’s rushing game. Kadon Harrison completed 12 of 19 passes for 175 yards.