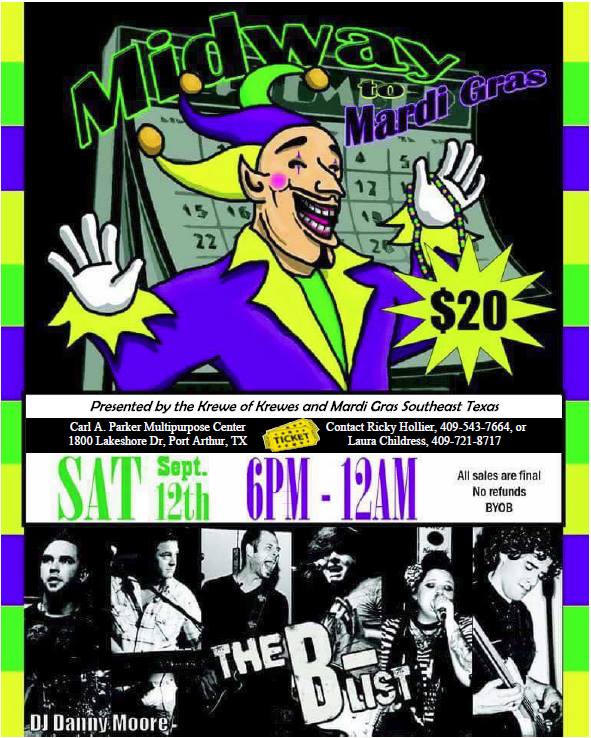 Southeast Texas Mardi Gras doesn’t happen until February 2016 but organizers and members of the Krewe of Krewes are ready for some celebrating.

The first ever Midway to Mardi Gras will be held from 6 p.m. to midnight, Saturday, Sept. 12 at the Carl A. Parker Multipurpose center, 1800 Lakeshore Drive. Tickets are $20 each but interested persons should snatch them up quickly because there are only about 150 tickets left out of 1,000.

For tickets, call Ricky Hollier at 543-7664 or Laura Childress at 721-8717. The event is presented by the Krewe of Krewes and Mardi Gras Southeast Texas.

Ricky Hollier with Krewe Bon Appetit, said the event is a way to revitalize, reorganize and made parades even more awesome.

“And we’re just crazy enough to do it,” Hollier said.

The upcoming event will be similar to the pre-Mardi Gras ‘Beans and Jeans’ event, where proceeds go back to the Krewes to help them gain membership, repair or buy floats and more.” At the time we were doing Beans and Jeans with about 10 krewes and went to the Krewe of Krewes and said, ‘Can we do another party to bring in other Krewes?” he said.

So, what started with 10 krewes has grown to 15 with the addition of Midway to Mardi Gras. Hollier said they have accomplished what they set out to achieve, bring more krewes in.

Midway to Mardi Gras is a BYOB event, all ticket sales are final and no refunds.

The new event will feature DJ Danny Moore and The Band B List.

BEAUMONT — A jury of 11 men and one woman spent two hours deliberating the guilt of Christine Johnson before... read more