PN-G prepared for 6A Clear Lake 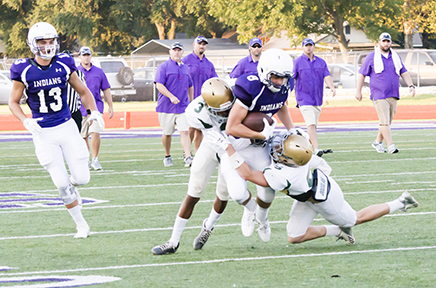 PORT NECHES — The last time Port Neches-Groves and Clear Lake stepped on a field together, the Indians had a quarterback playing in his first varsity start.

The end result was Adam Morse setting a school record with 383 passing yards in a 38-13 PN-G victory.

PN-G travels to Veterans Memorial Stadium in League City for a 6 p.m. Saturday kickoff against Clear Lake. This time Morse comes in having started 11 games and he and the Indians are looking to start 2015 off with back-to-back wins over the Falcons.

“We are excited,” PN-G coach Brandon Faircloth said. “Three weeks of two-a-days and two scrimmages, they are beneficial, but there is a new excitement around practice whenever it starts counting. We have had energy and we are [going to] Saturday night.”

Faircloth and the Indians are using the extra day to practice and game plan for the Falcons.

“It gives us an extra day to look at them, and we still have a lot of stuff we have to get better at,” Faircloth added. “It makes for a short week next week, so obviously I would rather play on Fridays if we can. In the playoffs, if we can get there, you have to play some Saturdays, so it is good training for our kids. There are some benefits to playing on a Saturday.”

“We are playing a really good team,” Faircloth said. “They are 6A and probably twice as big as us enrollment-wise. It is a huge challenge and that is what we want. We want teams to expose our weaknesses before district starts.

“They are a spread offense. They have some speedy receivers and of course their offensive line, like any 6A school, has great size. They will be a huge challenge for us. They are fast on defense. We know what we are in for. It will only make us better going against those guys.”

The seventh-year PN-G coach pointed to blocking and the team’s tackling as two of the spots the Indians need to improve on heading into the year’s first game.

“We need to improve on some of the fundamental things of football,” Faircloth added. “No coach is ever going to say his team is great at that, and I am not either. We do some things well. We have times when we are inconsistent.”

Morse comes into Saturday’s game having thrown for the second-most yards in a single season at PN-G with 2,937. His 31 touchdowns last year set a new Indians record.

“He’s the same guy,” Faircloth said. “He is very seasoned with a lot of experience. He is a coach on the field. He sees things the way I see them because I have coached him since seventh grade. When I get us in a bad spot, he can help me out and get us in a better spot.”

Morse is far from alone on offense. The Indians return Caisen Sullivan, Keynel McZeal and Jack Giblin at the receiver spots, and Jace Runnels and Kody Cropper have experience at the running back position.

Linebackers Anthony Anniboli and Trey Rembert, along with defensive backs Logan LeJeune and Bryce Meche are among the four best players at their positions in the area.

“We only gave up 14 points to West Brook’s first team and one of them was a fourth-down conversion,” Faircloth said. “Coach Templin and our defensive staff always get those guys ready to play. They play hard and they play smart. They obviously do a good job because they always give our offense the ball back. You don’t set those offensive records without having the football. Our defense plays as big a role in that as anybody.”

PN-G coach Brandon Faircloth: “We’ve had energy and we are excited about Saturday night. What has been good is our effort. Our kids have played really hard. They obviously care. This is a group that loves being a PN-G Indian. They love playing and love wearing purple and white. You can see it every day working with them. They care about this season and their teammates. Clear Lake is going to be a huge challenge on both offense and defense. On defense, they have good-sized kids and they are fast. It will be a good game and we know what we are in for.”

Clear Lake coach Sam Smith: “We are looking forward to Saturday night. Port Neches-Groves has a solid group of kids back and has a great football tradition. Brandon Faircloth does a great job, and they look pretty strong when you see them on film. They look like they picked up right where they left off last year. The quarterback can really throw the ball and he has big receivers. They are big up front and on defense they are the same way. They will be a stout test. We scrimmaged Angleton and they are also a very good 5A team. We graduated 49 seniors off last year’s team, so we have some new kids who need to step up in a hurry. They are going to get welcomed to Friday night football in a hurry. In the first game, you have to hang on to the ball if you want a chance to win. It will be nice to play PN-G on a dry field instead of that monsoon last year. It is going to be nice to see the progress we make in a full game.”