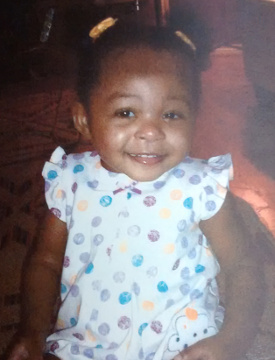 A volunteer with Court Appointed Special Advocates provided the court with a photo of Faith Mason smiling. The photo was taken a few months ago.

Johnson found guilty of injury to a child; family reacts

BEAUMONT — Jurors in the child abuse trial of Christine Johnson deliberated for two hours on Thursday and another hour on Friday become returning with a guilty verdict.

Johnson was found guilty of recklessly causing an injury that left her infant daughter with a broken neck. She was also found guilty by knowingly by omission causing the severe injury.

The jury will return to Judge John Stevens’ courtroom at 8:30 a.m. Monday for a continuation of the sentencing phase.

A majority of testimony in the sentencing phase on Friday included information from Jamie Hogge, a longtime volunteer with Court Appointed Special Advocates, or CASA and with Dr. Seth Silverman, a Houston area psychiatrist.

Hogge was assigned to Baby Faith from her arrival at Texas Children’s Hospital in Houston Aug, 18, 2013. At that time the infant was on life-support, had casts on all extremities and was near death. Baby Faith spent six to eight weeks at the Houston hospital before being placed in a therapeutic foster home. Hogge said Faith’s eyes would roam and not focus on any one object now would she turn her head when Hogge clapped her hands behind her head.

For two years Baby Faith wore a Minerva Brace — a hard plastic brace around her neck with an attached chest piece because any movement could cause her to be paralyzed.

The worse part for Hogge was not being able to physically comfort the child when she needed it the most.

Baby faith underwent physical therapy to help her regain muscle tone she had lost form being immobilized and if touched, would cry in pain.

“All they (therapist) could do is get her used to being touched,” Hogge said as she broke down in tears. The injuries — including more than 40 fractures — were throughout her body including brain damage. “If you tried to hold her or rock her you could kill her. When she needed to be held the most, she couldn’t be.”

The now 2-year-old is not able to eat on her own and only last year was able to handle pureed food.

“I don’t know if she’ll ever be able to eat solid food,” she said. “Two-year-olds are supposed to eat chicken nuggets …”

But she can smile and laugh.

“Her foster parents celebrate every little milestone,” she said.

Hogge also shared a development of Faith that left her horrified. Faith has developed precocious puberty due to the extensive brain damage she received. The affliction caused the baby to grow pubic hair and begin a menstrual cycle at the age of one.

Dr. Seth Silverman, who was a witness for the defense and called to the stand by attorney Ryan Matuska, interviewed Johnson on two occasions within the last four months and administered a mini-mental status exam. The psychiatrist also sorted through Johnson’s school records and spoke with several family members.

Silverman pointed to Johnson’s low scores on standardized academic tests and the special education classes she was enrolled in.

“There’s a lot of people who function at lower levels than Christine Johnson,” Knauth said.

Interviews with family members showed Johnson did not know about hygiene and had to be told to bathe, couldn’t dress herself or even shop.

Knauth called corrections officer LaMonica Jones to the stand to refute Silverman’s testimony that Johnson couldn’t function on her own.

Jones said Johnson bathes and dresses herself on her own and was a dorm trustee as well as performing specific jobs in the facility.

Coxe told jurors he also read the material regarding Johnson’s school history and did not find any special education classes. In 10th grade during the six weeks reporting period, Johnson scored 85 in reading and 83 in English II.

This, Knauth said, raises serious doubts to the theory of mental impairment.

During a break in testimony Latonya Jones, Johnson’s biological mother, spoke with The News about her daughter.

Jones doesn’t believe Johnson injured Baby Faith and that the child’s father, Darrell Mason was the one who hurt the child.

Mason is also charged with injury to a child and will go to trial at a later date.

Jones said the family is coping with the allegations and trial with prayer.

“We pray she gets probation,” Jones said. “We have all been praying for her. I pray every day.”

Earlier in the week the jurors were presented with graphic photos of Baby faith’s severe injuries. Jones said she started crying when she saw the images.

She cried again on Friday when she saw photos from Hogge showing a smiling 2-year-old Faith Mason.

“That’s my first grandbaby,” she said. To know I will never be able to see her ever again.”

During visits to the Jefferson County Correctional Facility Jones and Johnson pray together.

“I tell her that I’m behind her and I’m always going to love her,” Jones said.

Jones conceived Johnson when she was 13 and gave birth at the age of 14. At the time she was dating a man a little older than her, she said. She left Johnson alone one day with her the man when Johnson was about six months old. When she returned he told her that he had left Johnson in the tub alone while he went to get some soap. He returned and she was drowning.

The man told Jones the baby was uninjured but she called an ambulance anyway because she was concerned, she said.

Then her baby was taken away from her.

“They didn’t give me a chance to get her back,” she said.

Johnson was placed with a woman and was able to visit for a while then the woman died and that woman’s daughter took custody. By then Jones wasn’t able to visit anymore.

Later she would learn what school Johnson was attending and started a relationship with her daughter.

Jones talked about Johnson meeting Darrell Mason, who, she said, is a cousin. Mason was controlling and had a mean streak.

“I wish they (jurors) had time to get to know her (Johnson),” she said. “I wish I could go back and do it all (not leaving her child with the boyfriend, the near drowning and loss of custody) over again.”

“I teach my girls how to pray,” she said. “We get down on our knees every night and pray.”

Johnson, she added, had plans to graduate high school and enlist in the Navy. Instead she fell with the wrong crowd and the wrong boyfriend, according to the mother.

After hearing opening statements in civil case to stop construction of a Port Arthur housing complex for the elderly,... read more