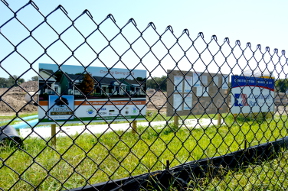 Work is progressing on a Edison Square, a 78-duplex project built at 3501 12th Street, where the old Edison school once stood. The affordable housing community is opposed by a group of neighbors who are against it being built in their neighborhood.

Judge Donald Floyd’s 172nd District Court in Jefferson County will hear the request for a temporary restraining and temporary injunction at 2 p.m. Friday.

At issue is whether construction of 78 duplexes to be built where the old Edison School once stood at 3501 12th St. were properly permitted by the city.

Plaintiffs in the case, Reginald Trainer, Efrain Avendano, Paul Hulin and Herman Leginston are seeking legal action against the city of Port Arthur in hopes of stopping the building.

“We are trying to get them to go back and look at what the zoning board did,” Trainer said Wednesday. “The permits are wrong. They cannot build duplexes where they are supposed to be posted as development. It has to be constructed like the rest of the neighborhood, or it will redefine the neighborhood.”

At the time, more than 26 percent of residents residing within 200 feet of the proposed building site opposed the project.

That number was later reduced after some of those voicing objections said they would get behind the project as long as certain conditions were met such as only elderly people being allowed to reside there.

In July 2013, by a vote of 5-3, City Council cleared the way for construction of the 128-unit Edison Square when the supermajority vote was no longer needed because some of the residents opposing the building had changed their minds.

In October 2013, a temporary restraining order was issued by Judge Floyd to stop the city from allowing a zoning change. Floyd subsequently ruled his court did not have jurisdiction in the case because the plaintiffs had not exhausted the appeals process at the local municipal level.

The residents’ opposed to the construction took their case to the city’s Zoning Board of Adjustments and Appeals to overturn the City Council’s prior vote to allow the zoning change.

Though successful in getting the vote overturned, the developer, ITEX Group, changed its project design from townhouses to duplexes, which the company believed were allowed under the city’s two family zoning designation.

The city permitted the project in November 2014, and construction started on the revamped 78-duplex unit design about three months ago.

Court papers filed with the district court indicate the project violates the two-family zoning designation because of the number of units proposed.

Because the plaintiffs have now exhausted the appeals process at the local level, they are taking the matter back to district court for a decision, Trainer said.

Trainer said he is not against housing for the elderly, but does not trust that only the elderly will be allowed to live there — something that Chis Akbari, with the ITEX Group said will not happen.

Federal Housing guidelines prohibit anyone that is younger than 62 from living in the Section 8 subsidized housing, Akbari said.

“These are subsidized housing, owned by the Housing Authority, so that is why they have such a problem with it,” Akbari said. “What this boils down to is Trainer is trying to get free publicity for his City Council race.”

Trainer said he does not see any impropriety in sueing the city while running for Council.

In fact, Trainer says he is not sueing the city at all.

“I am not sueing the city. I am only fighting for the citizens’ rights. The city has a charter that they must govern themselves with. Nobody is above the law. Whether as a City Council, or a citizen, it is my job to bring it to attention.” Trainer said.