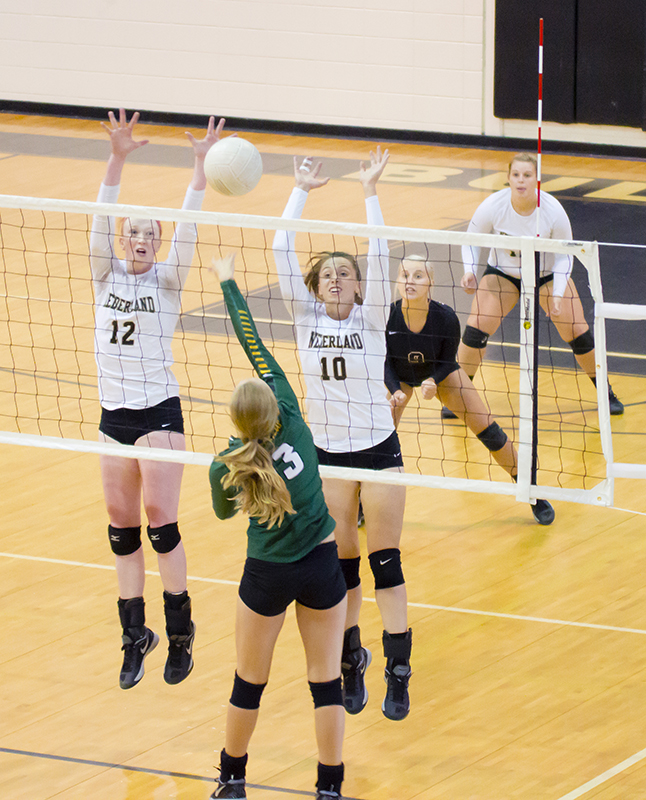 If there was any doubt whose team would win, Montalvo put an end to the mystery real quick.

She hit for 23 service points in the match as Nederland improved to 7-6 after competing in the rough Dickinson tournament over the weekend. LC-M is now 7-7 on the season.

“That tournament was good for the girls,” Nederland coach Kristin Lemoine said. “We want to get the girls exposure against some of the best teams. That will only make our team better.”

LC-M led a majority of the first game and jumped out to a 5-0 lead.

Nederland did not take its first lead of the match until Montalvo came up to serve with the game tied 12-12. Montalvo hit for seven straight service points and the Lady Bulldogs jumped out to a 19-12 advantage. The Nederland run was aided by six LC-M hitting errors.

Game 2 was never close as Montalvo’s serve proved to be the difference. Her serve forced 10 LC-M errors.

The combination of Montalvo setting Courtney Noel also proved to be too much for the Lady Bears in Game 2. Noel had four kills in Game 2 as Nederland won 25-13.

Nederland never trailed in Game 3, winning 25-17. LC-M closed to within 16-11, yet Nederland put the game out of reach when Katelynn Huckabay later hit for three straight points to make it 21-12.

The game and match ended when LC-M had another hitting error.

Noel put in 12 kills in the match, while Montalvo added 15 assists.

“We competed tonight,” Lemoine said. “We refused to let the ball hit the ground tonight. We wanted it and our eye work was on. Every match we have a motivational quote and today’s was about if you want to be a competitor or are you going to sit back and relax. Today we wanted to compete.”

Nederland participates in the Kingwood tournament Thursday and Saturday. The Lady Bulldogs have a home game against Tarkington on Friday.