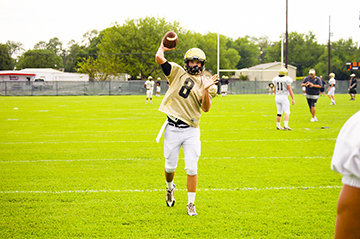 NEDERLAND — Mitchell LeBaron this Friday night is set to become the third different quarterback to open the season at the position in as many years.
“It is funny how things work out,” Nederland coach Larry Neumman said. “I would like to say we sit down every year and get a guy we can play for three years. We have had some of those guys. We try to put the best one we have in there. No doubt it is an advantage to be there more than one year.”
LeBaron won the starting job in the spring and has since won over the coaching staff and his teammates.
He came to Nederland two years ago from the Clear Creek ISD system. He served as the junior varsity quarterback last year.
Tonight he and the Bulldogs face the Class 5A No. 5 Crosby Cougars at Bulldog Stadium.
“It feels great,” LeBaron said. “I’ve been looking forward to Friday. A lot of preparation went into it.”
Quarterbacks coach Monte Barrow said LeBaron’s decision making has improved vastly since his time on JV.
“We have plenty of time in the spring to get him fitted into our offense and get him comfortable with it,” Barrow said. “We are not going to ask our quarterback to do something in our offense he can’t do. Coach Neumann has been good about letting our offense adapt to our quarterback, really to all our personnel. We do that rather than make the kids fit the offense. It’s not like college where you can recruit what you want for your offense.”
LeBaron has been playing quarterback since the sixth grade. He was in competition with Jacob Jones during the spring for the position. Jones is set to start at linebacker, giving LeBaron the chance to go in as the signal caller.
He will guide an offense that averaged 412.4 yards and 37.4 points a game in 2014. LeBaron takes over for Sage Seay who threw for 1,570 yards and 14 touchdowns a year ago.
LeBaron does have the luxury of passing and handing off to running back Austin Krautz and finding Connor Perkins down the field.
Krautz rushed for 1,103 yards, caught 41 passes for 517 yards and scored 25 touchdowns as a junior. Perkins had 27 receptions for 481 yards, for an average of 17.8 yards per catch, and seven touchdowns in 2014.
“Those are great guys to be on a team with,” LeBaron said. “We really try to get them the ball any way we can. Finding Connor deep down field seems to happen a lot. He is fast, there is no doubt about that.”
Neumann has sat back and enjoyed watching LeBaron improve over the two scrimmages, one against West Orange-Stark and last week against Livingston.
“He has improved since Day 1,” Neumann said. “Our team’s confidence behind him has really grown, really over the last two scrimmages. He is on track to have a fine senior year.”