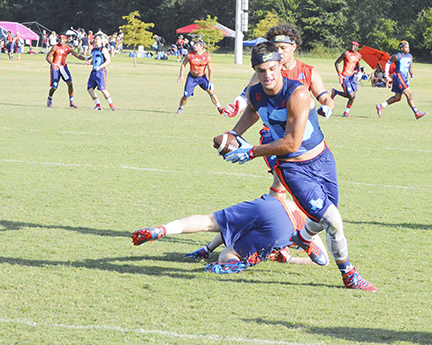 Giblin back after missing most of 2014

PORT NECHES — As a junior, Jack Giblin was well on his way to having a monster season.
Giblin had 17 catches for 312 yards and three touchdowns in just over two games.
Then when he came down along the sideline in Lufkin against Tyler Chapel Hill, the season was over.
Giblin injured his ankle severely enough that his junior year was over as quick as it started.
“I won’t lie, my receiver’s coach and I cried that night,” PN-G coach Brandon Faircloth said. “It was depressing. It really was.”
The weight of the injury really hurt Giblin more than the actual injury itself. This is a guy who wanted to be on the field with his teammates. His family has been a part of the Indians program for decades. This was supposed to be his shot.
“It took a lot out of me,” Giblin said. “All I could think about was getting out there to perform. The whole year before all I waited for was football. I was having a good season. It took a lot to accept the fact I was out. I had a lot going for me. It was going to help my college chances being out there.”
Then came another issue for Giblin. The 6-foot-3 210-pound-receiver needed the help of a wheelchair and then crutches just to get around the halls of Port Neches-Groves High School.
“It was rough,” Giblin said. “It made me look at people with disabilities. I came down to Earth a bit. I saw their strength to live with it every day. They were born with the disabilities. That gave me strength to keep moving forward.”
Faircloth was impressed with No. 13’s tenacity about getting back on the field.
“We won the game he got hurt in,” Faircloth said. “That injury put a big, dark cloud over it. You love winning and winning is tough. You want to celebrate. I know how much Jack Giblin loves football and I know how hard he works at becoming a really good player. He has dreamed his whole life of becoming a PN-G Indian.
“Anytime something happens like that to a kid, it’s depressing. You love them so much and to have that taken away from them is difficult for anybody. It was very emotional for all of us.”
Giblin did not stay down. No way.
“Being back, it feels like a lot is off my shoulders,” Giblin said. “I am glad to be out there for my team again. I enjoy knowing I am out there for those guys.”
Said Faircloth: “To his credit, like we knew he would, he was not going to stay down. He had a great rehab and he is back at it. We are trying to get him back in it. He scored a touchdown in both scrimmages. Those things (injuries) happen. That is how life goes sometimes. He was a great leader even when he wasn’t playing.”
Giblin has lofty goals for he and his teammates who are looking for the first district title at PN-G since 2009.
“We won’t take a loss,” Giblin said. “I will not accept any loses this year.”
His physical abilities and determination paid off this summer. He committed to the University of Texas-San Antonio.
“UTSA is a blessing, it really is,” Giblin said. “I am grateful to play the sport I love in college.”
In a few short days, Giblin will be back on the field in purple and white. His Indians travel to face the Clear Lake Falcons at 6 p.m. Saturday.
“I won’t sleep much Friday night, if at all,” he added.

NEDERLAND — Mitchell LeBaron this Friday night is set to become the third different quarterback to open the season at... read more