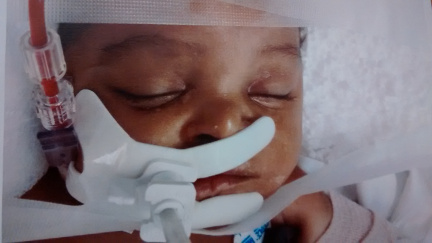 A photo of Faith Mason at age one month taken during an emergency room visit Aug. 18, 2013. The photo was shown as evidence of alleged physical abuse during the trial of the child’s mother, Christine Johnson, on Tuesday.

BEAUMONT — A jury of 11 men and one woman learned of the many injuries suffered by a Port Arthur child whose mother is on trial for what medical personnel call the worst case of child abuse they have ever seen.

The child, dubbed “Baby Faith” Mason, suffered 19 fractures, which included broken arms, legs, neck and a brain bleed at the age of one-month.

Christine Johnson, now 22, is charged with two counts of injury to a child; one in relation to the alleged physical abuse and a second charge for neglecting to take the child to the hospital promptly.

The child’s father, Darrell Mason, also faces charges but is not on trial at this time.

Prosecutor Pat Knauth called Angela Webb, an emergency room nurse who was on duty on Aug. 18, 2013 when Johnson brought the child in to Christus Hospital-St. Mary for treatment.

Webb’s voice cracked as she described what she called the worst case of physical abuse she has ever seen,

“Her femur was broken on the left side and her eye had turned black. In the ER we call that ‘raccoon eyes,’” Webb said while describing how they tried to check the then one-month old child’s vital signs and insert an IV. “Every time we grabbed something (body part) it was broken.”

Nurses were forced to place the IV in the child’s neck and as they tried to stabilize the infant began to ask the mother how this happened.

Webb looked directly at the defendant as she broke down in tears.

“I said ‘tell me what happened to this child, lie to me, tell me she fell off the bed … but you didn’t say anything. You didn’t cry. You didn’t look at her. Nothing,” Webb said. “Kids’ bones are malleable so for a child that age to have those broken bones, something bad happened.”

While working on the child Webb began to notice her other injuries, a “bruised, swollen, deformed arm” and her “left femur sticking out.”

“When I picked her up she felt like Pixy Stix,” she said referring to the powdered candy in paper straws.

Medical personnel also noticed Baby Faith’s right foot “flopped” and hung to the side indicating more broken bones as well as a large area of black and purple bruising along her coccyx or tailbone area.

Webb also described “hangman’s fractures” — fractures of specific neck vertebrae that indicated the infant had a broken neck as well. The injuries were so severe that a team from Texas Children’s Hospital in Houston flew to the Port Arthur hospital to work with the infant before flying her to Houston for treatment.

Defense attorney Ryan Matsuda cross-examined Webb asking ‘you don’t know who injured her? To which Webb answered ‘no.”

Prosecutor Randi King who is wokring with Knauth on the case, next called Dr. Shelby Evans, emergency room physician and medical director at St. Mary hospital. Evans, who has been an ER physician for 25 years, underwent residency training in Los Angeles, Calif. during the infamous Rodney King riots and is familiar with many types of trauma.

Evans told jurors he was writing in a chart when Webb came through the ER with Baby Faith. The swollen legs and arms and deformed limbs were an “obvious, obvious case of child abuse.” When the child was placed on a bed Evans noted the femur was “C” shaped.

He said he tried to ask the mother what had happened by “didn’t get a clear cut answer.”

Johnson, who was present in Judge John Stevens’ courtroom during the proceedings, was wearing a khaki skirt, dress shirt and white sweater. She showed no emotion during the trial or during viewing of the photos taken at the ER of the injuries.

“She was very nonchalant. No crying. No emotions. The other two women with her were upset,” Evans said referring to Johnson’s family members.

“Do you flat out believe this is a serious physical abuse case?” King asked.

Under cross-examination Evans stated he did not know who caused the injuries or when they occurred.

Child Protective Services Investigator Tisha Francis was called to the stand where she stated she observed the child’s injuries and also called them the worst she has seen in her five years as a CPS investigator.

Francis attempted to find out what happened to the infant but said Johnson gave no explanation but did say that the child’s father had kicked her while she was asleep.

Knauth asked if Johnson ever admitting doing harm to the baby to which Francis said yes.

“She picked her up (making jerking motion) because the baby woke her up and made her mad,” Francis said. “Then she said the baby wasn’t hurt, nothing was wrong with her eye or leg.”

CPS later went through the process of terminating parental rights — something that was done within a two-month span instead of the six-month to year-long normal process.

The last witness of the day was Port Arthur Police Office Ileana Jacquez.

Jacquez was an officer in field training under Officer Barbosa. She stated Johnson was uncooperative and didn’t respond to questions at first and was later taken to an empty room where she made a statement to police saying she and Mason had went to Walmart and she noticed a bruise on the child’s arm.

Jacquez also noted the mother did not seem upset while at the hospital. “There was no emotion. She didn’t cry while in the EWR with her child,” the officer said.

The trial will continue at 9:30 a.m. Wednesday in Judge Stevens courtroom.