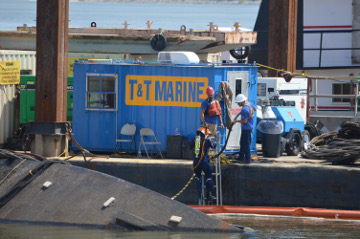 A diver with T&T Marine emerges from the water next to the capsized tugboat Louise in the Intracoastal waterway in Port Arthur on Monday. The 65-foot inland river tug capsized Friday. Mary Meaux/The News

Work began on Monday to upright a capsized tugboat in the Intracoastal Waterway.

A team with T&T Marine Salvage arrived on Sunday with a spud barge — a special barge with four posts on each corner that are lowered to secure the vessel and a crane. A diver was seen surfacing from near the wrecked inland river tug Louise around 11:30 a.m. Aug. 24 as crews with OMI Environmental Solutions manned a boom and perimeter around the wreckage.

A portion of the seawall was roped off and Port Arthur Police Department officers made routine passes to make sure motorists kept their distance. The Louise is located in about 15 foot of water but not far from a 30-foot drop-off, U.S. Coast Guard Lt. Adolfo Viezca said. 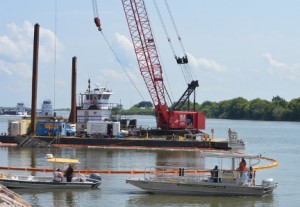 Employees with OMI Environmental Solutions keep watch over a boom placed around the capsized tugboat Louise in the Intracoastal waterway in Port Arthur on Monday.
Mary Meaux/The News

Viezca explained the plan was to lift the vessel and drain all of the water before towing could be done.

A temporary closure of the channel was necessary on Monday during the salvage operations.

“We don’t want to make a dangerous operation even more dangerous by having other vessels create a wake for the salvage teams,” Viezca said.

The U.S. Coast Guard received a call of the capsized vessel Louise at about 5:35 p.m. Aug. 21. Four persons were on board at the time and a Good Samaritan rescued all four. No injuries were reported.

The ship channel was closed to deep draft vessels for about 24 hours, reopening Saturday afternoon.

Daniel Dubois, senior dispatcher with Sabine Pilots, said the closure didn’t affect them very much. At that time there were about two vessels that were held up.

The brief closure on Monday affected three outbound vessels and one inbound vessel.

The investigation into the cause of the incident remains under investigation. Viezca said it could be due to a number of factors including mechanical failure to operator error.

The structural integrity of the boat’s hull was good which could rule out operator error.

The vessel is located not far from Civic Park at Lakeshore Drive and Richmond Avenue.