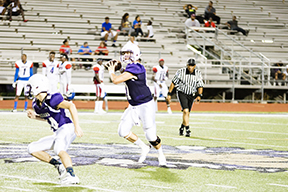 PORT NECHES – Port Neches-Groves coach Brandon Faircloth saw the good and bad Friday night.
The bad being a lull by his Indians in the second quarter against Beaumont West Brook in PN-G’s final scrimmage of the season.
The good being his team erasing a 14-7 deficit to win 21-14 behind touchdown catches by Keynel McZeal and Jack Giblin.
Giblin’s touchdown sealed the deal for the Indians as he hauled in a pass from Adam Morse. The two teams decided not to take the field anymore when PN-G scored with just over 2:30 left.
“There is going to be times this year when we are down,” Faircloth said. “You have to play like you are ahead. You can’t be too high and you can’t be too low. You have to be steady and worry about the job you are supposed to do.”
West Brook was up 14-7 in the second when Morse threw an interception. The only reason the Bruins did not score on the turnover was a game-changing tackle by center Justice Langston.
West Brook was unable to score a touchdown and then missed a field goal right before the second quarter came to a close. The two teams played three quarters.
Morse was sacked three times and threw just the one interception against a very fast, big Bruins defense.
“They (West Brook) pushed us,” Faircloth said. “That is the best thing about scrimmaging those guys. They are well coached. They are huge. They are maybe the biggest team we will play and hopefully the fastest team we will play. That is who you want to set yourself up against whenever you get ready to start the season. Even West Brook’s twos and threes are pretty good compared to a 5A team.”
Running back Kody Cropper scored the Indians’ first touchdown of the evening from three yards out. It was Cropper’s second touchdown in as many scrimmages.
PN-G now has a full week to prepare for its first game. The Indians travel to Clear Lake next Saturday for a 6 p.m. contest.
“I love scrimmaging here at PN-G,” Faircloth said. “It was a game-like atmosphere. It is fun to get the kids out here under the lights. We get the guys out there and in front of the fans with the band going, it makes for a fun night.
“We have a long way to go. We are going to have to have a great week of practice to get ready to play Clear Lake. It starts at 6:45 Monday morning.”
PN-G defeated Clear Lake 38-13 in 2014. Morse, in his first varsity start, passed for a school record 383 yards.