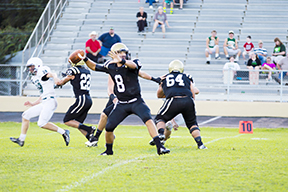 NEDERLAND — Mitchell LeBaron threw for 404 yards in less than three periods of work Friday night for Nederland.
It was quite a preview he gave the home crowd of what he can do. Not that he immediately realized it.
“I really don’t keep track,” he said.
LeBaron’s strong arm was only part of the positives the Bulldogs saw in their final preseason scrimmage, a 35-7 win over Livingston. Yet, it was the most glaring of improvements the Bulldogs can boast from their previous outing, a 35-28 loss at 4A state runner-up West Orange-Stark.
“We just focused on ourselves, and we did that, so I’m very happy with the way we played,” the first-year starter, who transferred before last season from Clear Springs, said.
All coach Larry Neumann was looking for were bit-by-bit improvements.
“You have to take a lot of things into consideration,” Neumann said. “My first impression is that we were a better football team totally than we were last week. You take into account who we played last week and who we played this week. We had some people playing different positions from last week. There are a lot of variables that are not the same as last week that matter.”
For one, Livingston is coming off a 2-8 season. Then, there are the personnel changes, mainly in the Bulldogs’ secondary. Neumann cited Ty Sheppard, Connor Thompson, Jalin Johnson and Tavian Mayfield in particular for their efforts.
While statistics from the WO-S scrimmage were not available, it appeared the Bulldogs’ offense is hitting its stride early. LeBaron threw for 309 yards in the first half on 10-of-14 passing and finished 13 of 17 for the game with one interception.
Getting adjusted to the offense and taking over Sage Seay under center has been relatively easy, LeBaron said.
“The players and coaches have been real helpful working with me,” he said. “I’ve really learned a lot and been confident.”
The wealth of playmakers surrounding LeBaron is making his job easier. Austin Krautz rushed just five times for 63 yards, all in the first half. Connor Perkins and Ryan Leleux each had three carries, but both combined for 60 yards.
Perkins helped get LeBaron started with the catch of a high-arcing 57-yard bomb to the Livingston 11 on the opening drive. Krautz capitalized three plays later from the 3 for the opening TD.
Krautz earned his second score of the night in the period, bouncing off the line twice before sprinting 40 yards down the field for Nederland’s second score.
LeBaron’s first TD strike was to Dean Fisher from 10 yards out in the second quarter to give the Bulldogs a 21-0 edge. Then, he finished off a 42-yard drive in four plays with a 9-yard toss to Jalin Johnson on a cross route to set the would-be halftime score at 28-0.
All the while Nederland’s defense held Livingston to 34 yards — 17 rushing and 17 passing in the half. Nederland outgained Livingston 584-108.
“The cohesiveness we’re showing on both sides of the ball indicated to me that we’re getting comfortable in what we’re trying to do, and our personnel is getting a little more used to one another,” Neumann said.
The scoreboard actually reset to 0-0 for the second half, and Livingston struck first with a 16-yard completion on fourth and 6 early in the fourth quarter. But Sean Nguyen capped the night for the Bulldogs with a 17-yard carry up the middle on the ensuing drive.
Neumann was happy with the improvements Nederland made this week, knowing the challenge for next week is much greater with 5A fifth-ranked Crosby visiting.