Charles learns how to fly 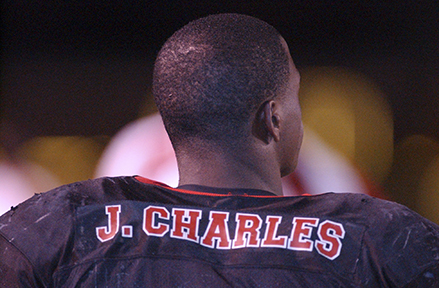 This is the fourth and final part of a feature on Port Arthur native Jamaal Charles, who currently stars as a running back for the Kansas City Chiefs. The story with Charles competing in Special Olympics at a young age.

As he remembered that day in 1996, Charles recalled winning the 100-meter dash, the 200, hurdles and the long jump. The Special Olympics groups competitors, who include kids with intellectual disabilities and cognitive delays, into equitable groups by age, gender and ability.

Charles’ experience at that event in nearby Beaumont is what led to a heart-rending speech at this year’s opening ceremonies for the Special Olympics World Games in Los Angeles.

“I was just trying to inspire people and give back to the people who are going through things in life,” he said during Chiefs training camp this month. “That’s what it’s about, man.”

Charles administered the athletes’ oath with a preamble that was poignant in itself: that he had been asked to talk about courage but couldn’t without “talking about fear.”

“People made fun of me. They said I would never go anywhere,” he said this summer at the games. “But I learned I can fly. …

“The confidence turned to courage, the courage to be the best that I can be every day.”

Charles zoomed between his Chiefs teammates and several hundred children during his free football clinic in June in Port Arthur.

In addition to the Jamaal Charles “Youth Matters” Family Foundation event, which was orchestrated by Arlene LeBlanc and dozens of family members, Charles was in town to attend the roast in his honor.

Even if he largely remained shy outside the home through his youth, Charles ultimately had the strength to let his personality emerge more — and let his athleticism speak for him too, winning a track championship at Texas before being drafted by the Chiefs in 2008.

He has a cherished family of his own now, with his wife, Whitney, and two young daughters, and he seems to know no apprehensions.

If you watched his Special Olympics speech or how he turned the tables on those roasters in June, you saw someone comfortable in his own skin and who speaks with the eloquence of the heart.

“He hasn’t let the NFL change him,” said his cousin RaNysha, a former track star at LSU and now a social worker, “and that’s what we appreciate most about him. He’s so humble, and he appreciates where he comes from.”

All at once, RaNysha paused to point out Vicky Conner, Charles’ special education teacher.

She had come to say hello to Charles, whom she hadn’t seen for a few years but still follows closely.

Until then, Conner hadn’t known that Charles’ foundation designates money toward five annual scholarships for learning-disabled children in the school district.

Or that he’d been second-team academic All-Big 12 at Texas.

“I’m getting chills,” she said.

All because teachers like Conner, a loving family and a heart yearning for acceptance helped Charles harness what was inside and take off.

“It’s not about judging people. It’s about expressing yourself in your own way,” Charles said, reflecting on his journey. “Everybody’s different. That’s just life. I don’t think anybody in the world is the same, even twins.